Anime has long held an influence in the world of video games. During gaming’s rise to prominence within mainstream culture during the 70s and 80s which was helped greatly by a little known Japanese company that is still around today, Nintendo is a global giant in video games and has been for decades. While gaming was becoming increasingly popular so has anime with shows like Mobile Suit Gundam and Speed Racers. Manga, which much anime is derived from, had been around for much longer, but its expansion into becoming animated only helped it to grow and evolve. It wasn’t long before many animated properties were getting their own video games featuring their iconic characters in a variety of genres. Properties like Gundam have gone on to be in several video games. Dragon Ball Z one of the most well-known anime franchises ever; it even released an animated special to coincide with the release of Dragon Ball Z Gaiden: Saiyajin Zetsumetsu Keikaku both featuring the villain Hatchiyack. When Hatchiyack made a return in Dragon Ball Raging Blast 2 the special was edited and reanimated to be bundled with the game. 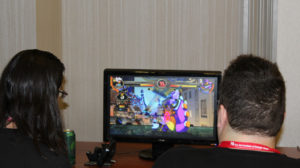 Atlus is one of the more popular companies when it comes to bringing Japanese games stateside. They’re mostly known for their Persona and Shin Megami Tensei series which have had anime adaptations. They are also a huge publisher bringing us such gems like Demon Souls and King Of Fighters among many others in gaming. 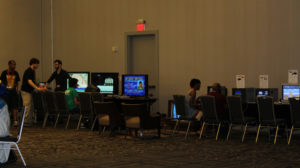 At Animazement this year two rooms were made. One was an arcade and the other was a huge room filled with many different consoles and a few arcade cabinets. Throughout the con different tournaments were held like Carolina Clash Rebirth which took place on Saturday and featured six different games. 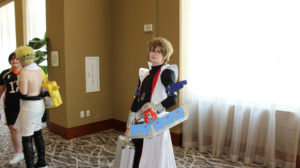 The con even allows you to bring your own system. Many of the people I talked to were very friendly and always happy to sit down and play a game for a few rounds. I didn’t win very many but I did have a lot of fun. A personal favorite of mine was the rhythm games like Dance Dance Revolution. While I didn’t play any of them, there were a lot of really good players who were able to perform very well. 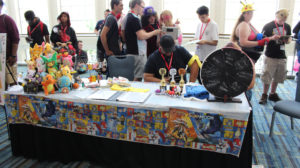 Along with video games, a lot of people could also be seen playing card games; I even saw Seto Kaiba walking around. He doesn’t need rules because he has money. While there weren’t any specific tournaments for the card games, Pokémon was a big part of the scene this year. Celebrating twenty years of Pokémon with a weekend long even for Sun and Moon players.

Watching the fighting game tournaments were a real treat. It’s not as strict as actual competitive matches, so the fights were a little more random and fun in terms of which fighters were chosen and the varying skill levels. It was a great weekend for all things gaming and anime at Animazement.