The third and final reveal from THQ Nordic is here and it is the much-rumored remake of Destroy All Humans! that many have been hoping for. All of those hopes sprung up way back when the IP was bought by THQ and now we see that they have tasked Black Forest Games with remaking the game and bring it to us in 2020. When in 2020 is still a mystery, but at least we know we will have more Destroy All Humans! that year on the PS4, Xbox One, and PC. It seems fitting for the year here in the U.S., but maybe that is just me. I will not speculate more on that and just dive into what we know for the game at this point.

Sadly, it is not a whole lot as all we have is a nice reveal trailer for the remake of Destroy All Humans!. It does not look to be in-engine or house any actual gameplay, but it is a solid Rammstein music video for those who love the band as I do. I feel like they could have gone with GWAR to be a bit more fitting, but they were not making this just for me. They are remaking it all for all the fans of Destroy All Humans! giving us the fun side of the alien invasion in the ’50s with all the weapons and abilities we remember from before. It also looks like we will get to finally see the Lost Mission of Area 42 mixed in too. Happy days indeed.

The cult-classic returns! Terrorize the people of 1950’s Earth in the role of the evil alien Crypto-137. Harvest their DNA and bring down the US government in the faithful remake of the legendary alien invasion action adventure. Annihilate puny humans using an assortment of alien weaponry and psychic abilities. Reduce their cities to rubble with your flying Saucer! One giant step on mankind!

While the tease and reveal for this Destroy All Humans! is nice, we also were able to scrounge up some screenshots of the game as it stands. I will say that it all looks amazing thus far and we may get to see this franchise reborn and flourish again under THQ Nordic. As long as everyone sticks to what we all loved about Destroy All Humans!. That being the destroying of all the humans with the anal probe gun and psychokinesis. Maybe a few blades in there too for personal measure, but that is just a private hope on my end. Have a look at what we have here for now. 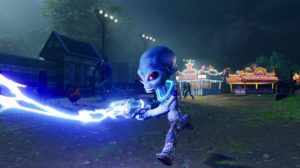 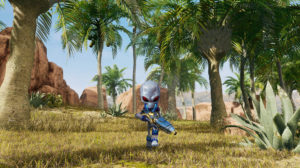 How excited are you to see that Destroy All Humans! is being remade for the modern day? Were you hoping to see another sequel in the line or will this reboot the franchise to let the developers keep running with it all? What do you think about how the game looks at this point or will you be holding off until you see live gameplay? Let us and the world know down in the comments and discuss. When we have more to share for Destroy All Humans!, we will share it all here. All you need to do is keep checking back in for all of that and more.