Pathfinder: Wrath Of The Righteous

We sit down for some hands-on time with Pathfinder: Wrath Of The Righteous to see just how this new Pathfinder title is evolving the IP and gameplay up to now

There is a beta going on for a select group of gamers out there who want to see how Pathfinder: Wrath Of The Righteous is shaping up and how it will further expand upon the gameplay experiences set for with Kingmaker a few years ago. That was a title that was met with some mixed feelings out of the gat, but Owlcat Games was able to start to correct many of those and look to bring them fully into the core of this title. That and add a whole lot of new things to this Pathfinder outing on the PC. This is where we get to say that we have had a chance to give the current build of the game a go and get some hands-on time with it to try to put it through some of its paces. Even if it is still in just an early state and slated for a September 2nd release as of this writing.

Now that we have that out of the way, we can dive right into how this Pathfinder title is starting to shape up. Obviously, right out of the gate we are met with the character creation process that adds in all kinds of options bringing us to 12 different races and 25 different classes, with a smattering of the archetypes that you can place on them in the tabletop pen-and-paper version of the game. From a first-hand experience here, this is a system that one can easily get lost in when it comes to time and perfecting your build but for those that just want to get right in on the Pathfinder experience, there are a few changes that make it much more accessible from the start. The bigger one is that there are more contextual tutorials and information to help guide players to the information if they so want it for number crunching but also a bit more of the broad strokes for those that just want to dive in. We have a whole lot of options here just to create a character and if this is the first time, it would feel overwhelming if these were not in here. Hells, even for an experienced player like me, some of them helped fill in some of the gaps in my knowledge and easily made things more engaging than placing a wall for entry. 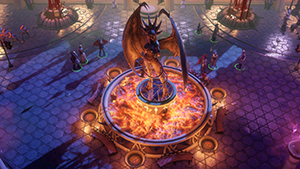 One of the bigger focuses for a character in Pathfinder: Wrath Of The Righteous is the new cavalier class and the mounted combat. This is generally something I stay away from in the tabletop version of the game but figured I would see if the digital version would change that. Especially since you can start off with a Velociraptor as your mount, one that I quickly nicknamed Velocipastor to fit the setting of the world. This is not the only class in Pathfinder that offers up having an added companion or beast that turns your one character into two, but this one was one that we should be able to mount and use the special abilities to the fullest in combat. This is something that I did not get to fully experience in my play as I could never get my character to mount up, so I cannot speak to how it truly will all play. It was nice to have a hard combatant with some teamwork feats in the mix while able to send good ol’ Velocipastor out to do some damage or help the others we found along the way in the grand story being told here. This brings up two more interesting things to see get a vast improvement from Kingmaker.

The first thing here is how the story and world of Pathfinder feel like it is getting fleshed out much more and offering up more of those cinematic sequences that we just read the text for before. From the opening sequence of the story to many others throughout, it seems like Owlcat Games found a nice way to mix in just a conversation and then the huge world-changing events that we going on. Something you could always see coming but still felt like they hit the pacing and expansiveness of the world along the way. Larger-than-life characters do not seem to be limited to the small image and descriptions in the text. The whole opening to this shows off a giant demonic Praying Mantis fighting and slaying a massive Dragon with more detail than I remember from Pathfinder: Kingmaker. Again, this was not only limited to scenes like this but with many others mixed in that, it will be more engaging for gamers to play through when the full version of the game launches in a few months. It gives us all so much more in the world and the characters we will have along for the ride as well. 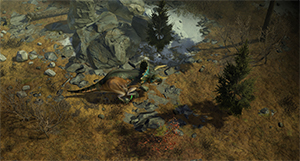 To that end, and the second thing that made a huge note for me, it does look like find and using other characters in the story and game has a huge shift from Pathfinder: Kingmaker. I was able to log in ten to fifteen hours of gameplay here and had eight different characters to work with and swap in if I needed to. Some of which were forced for the story but others are hidden along the way through different dialog choices and actions we take. Actions that also seemed to shape and change the world as we made them too. Compared to the last title where I was lucky to have 5 members of the team to play with at about this point, it does seem like Pathfinder: Wrath Of The Righteous is going to make it feel like we can fill out our armies for the coming war against the demons of the Abyss. That is kind of the whole premise of the adventure path and story here and it is amazing to see that change was brought in to give us all a little more to play with in this epic tale.

Sadly, with the limited time and content in the current build of it all, I did not have a chance to make it to the army building mechanics for the game. They do seem to be vast and implemented in a way that could make it worthwhile in Pathfinder again. Also, while I did not get much to play with when it came to the Mythic Paths, there were elements teased and shown along the way to give a bit of a taste. Given that these generally happen later in the scheme of it all, it makes sense but that did not stop me from making choices along the Demon and Angelic paths when it came to it all. Even after being filled with the flaming energy of an angel from the start, it did not feel like I was going to be forced down that path if I wanted to go down any of the 6 different options we will have when Pathfinder: Wrath Of The Righteous launches. Those choices also felt like they had a larger purpose to it all instead of just giving us super-special powers to use on top of everything else. I will also say I was holding off a bit to see how it will all go in the final game too, but even dipping a toe in highlighted that it should be another great addition to the gameplay as suspected. 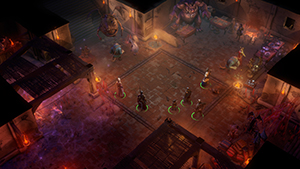 While Pathfinder: Wrath Of The Righteous is, obviously, a new adventure path, quite a bit of what was working from Kingmaker is also making its way back over to fill out the core of it all too. The various options for difficulty and real-time play are in there and we get to see how the turn-based system has evolved a bit further to make things feel closer to the tabletop version of Pathfinder too. The bigger thing to take away from all of this, besides the new items, is that it does look like Owlcat has improved and perfected so many things from their first outing that this could be the way that many gamers out there can experience this path. It may be altered along the way to make for a better video game and work with parts that need a human to dictate, but Wrath Of The Righteous in its beta form was much more engaging to me than Kingmaker and I can see that being the case for those that want to dangle their feet in for another bit of high-adventure and demon-slaying. It will scratch all of those itches out there and it looks like the team is only looking to further expand it all.

Based on the adventure path of the same name, Pathfinder: Wrath Of The Righteous is a classic isometric CRPG game that follows in the footsteps of the previous digital adaptation of Paizo’s tabletop RPG, Pathfinder.

Pathfinder: Wrath Of The Righteous is currently in development by Owlcat Games and is slated to release on PC September 2nd, 2021.