A new title, Mortal Shell, is announced and Mortal Shell will be bringing a new twist to the Soulslike game genre

Things are getting darker here in the gaming world, as we have an announcement for Mortal Shell today. This would be the next entry into the soulslike genre of games with the look and feel fitting perfectly into it all. All with what looks to be the nice twist that we will be able to change “shells” to fit exactly how we want to play and not just the same one everyone usually gets. This is where I am guessing we get the title Mortal Shell, as it looks more like we are going to be a spirit riding in these hunks of flesh to go out and do what we need to do best. That being attacking and killing all forms of other monsters out in the world of the game. All of which will be on the PS4, Xbox One, and PC at some point near the end of 2020.

The shells we are going to get in Mortal Shell, and you can see this a bit in the following trailer, will be that of defeated warriors in the story of it all. It would be interesting to see if any of these will be iconic from our real-world history or those of other fallen players in the game. That would require Mortal Shell to be an always-online kind of thing, but it would be interesting to see. It would also force players to have to rush back to reclaim their bodies before another, so that could be a bit much for what the game is already bringing. Have a look and see just what we are talking about just below and see if this will be the next title you punish yourself with.

Mortal Shell — the uncompromising, authentic, and hauntingly beautiful action-RPG built upon the ruthless traditions of the soulslike genre — has been revealed for the first time by the newly announced indie studio Cold Symmetry and its publishing partner Playstack. The eye-opening world premiere trailer — featuring a sample of its exquisitely crafted worlds, fearsome combat, and menacing foes — can be seen for the first time here.

Previously known as Dungeonhaven in its earliest days of development, Mortal Shell has been painstakingly designed by a prized coalition of veteran developers who are credited with working on some of the biggest AAA titles on the market. Produced by a core team of just 15 people, Mortal Shell was only made possible due to the team’s pedigree and burning desire to honor the painful majesty of the genre.

Awakening as an empty vessel, you will enter into a shattered and twisted world where the remains of humanity wither and rot. Implored to do the bidding of the mysterious “Dark Father”, you must traverse this tattered landscape and track down hidden sanctums of devout followers. There, in Mortal Shell’s most hallowed grounds, you must overcome formidable foes and harvest the sacred glands. You won’t be truly alone when the dead litter your path: Scattered across this land are the remnant anima of lost warriors who can be inhabited to gain their unique abilities and knowledge of weapons. The Dark Father is desperate for you to complete your task — but to what end? 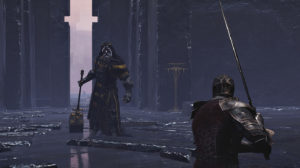 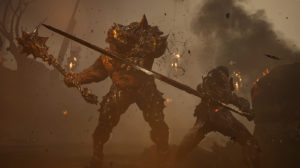 Does Mortal Shell look like it will be the next big game you are going to beat yourself with or will you be skipping this one? Do you think we will see some historic figures in the mix or will it all stick to the fantasy world it is all set in instead? Would you like to see a gameplay mechanic that would have you needing to rush back to your body before another could take your shell? Let us know what you are thinking down in the comments and then feel free to discuss it all there. For more on Mortal Shell, be sure to keep checking in on the site for all of that and much more.