The wait for the next episode of Life Is Strange 2 has been a long one and it looks like we will be waiting even longer for the third episode to drop out there in the wild. We now have the release date for that episode and it looks like DontNod plans to have it all ready for us on May 9th. That is quite a ways out there for those of us who have been captured by the story so far and want to keep going with it. It is made only worse when you think about how long we had to wait for the second episode to come out after it seemed like Life Is Strange 2 was going to be hitting releases rather quickly. Nonetheless, we have a date for it all now and know when we can pick it all up again.

To add to all of that, we also have the release schedule laid out for the rest of the season to go with this. Get ready to have a little bit of heartbreak as it looks like we will not be able to see the end of this season of Life Is Strange until the end of the year. The fourth episode is slated to drop on August 22nd barring any development issues. The final episode having the same caveat added in as we can look for that on December 3rd of this year as well. That is one hells of a break between each episode of Life Is Strange 2 that it almost seems like we should have been waiting for the full release instead of episodic. That or we will be forced to keep replaying each episode between the breaks so we do not forget where we were in the story.

Square Enix is excited to announce the release date for the third episode of the all-new five-episode season from Square Enix External Studios and Michel Koch and Raoul Barbet’s Life Is Strange team at DontNod.

The Life Is Strange teams at Square Enix External Studios and DontNod Entertainment would like to share the plans for upcoming Life Is Strange 2 content in 2019 with players. 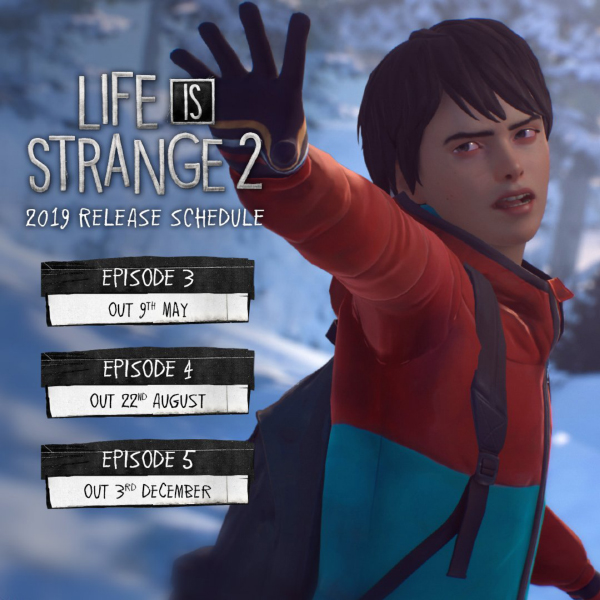 Episode 3, ‘Wastelands’, continues Sean and Daniel Diaz’s journey to Mexico, as they reach the towering redwood forests of California. Falling in with a community of drifters on the fringes of society, the brothers are exposed to new experiences, encounter new friends and new challenges, and must confront much about themselves in the process. New relationships cause friction between the brothers and raise doubts about their unity. Can they stay together, or will their journey together end here?

How are you feeling about this long gap between episodes for Life Is Strange 2? Does it make sense to have the long breaks or is this something on the side of development needs for the team? Will you be waiting until this December to just play it all in one shot or will you stick with the episodes as they drop in this manner? Let everyone out there know what you are thinking down in the comments and then feel free to discuss. For more on Life Is Strange 2 as it comes, be sure to be right here. We will keep all of the updates coming at you as soon as we find out about them.