Just when you thought the shark had moved on, it looks like there will be a new evolution to Maneater as it will be on the PS5 and Xbox Series X at launch and with some new upgrades. Yes, this shaRkPG from Tripwire Interactive will be swimming its way into some new waters on November 10th and 12th depending on the system. Also swimming in as a free update for anyone that currently owns Maneater before these new systems come out. Not only that, but those who have been playing on the PC will not be left out as these new additions will be coming to make the gaming experience just that much better. Not a huge surprise, but I felt like it was worth noting here.

For those looking to evolve their Maneater title, this new upgrade will feature 4K resolution upgrades that will run at 60fps. Ray tracing support and some of those flashy new extras that the controllers can do in the next-gen systems. Not the biggest of shocks to have here for Maneater, but it is nice to see it will carry over as the consoles carry forward. Not only that, but offer up those graphical upgrades that PC gamers have been wanting and console gamers will soon be able to employ all around. Now if only we could get some extra content to play besides just going in and killing all of the humans again… 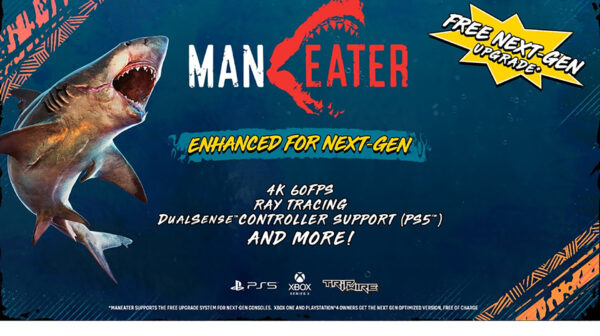 Fresh off of the wake of a spectacular launch on current-gen consoles and PC via the Epic Games Store, developer and publisher Tripwire Interactive and retail partner and publisher Deep Silver, Inc, are thrilled to announce that Maneater has sold over one million units worldwide. To celebrate this significant milestone and the growing pool of players who have successfully navigated the harsh waters of this open-water, action-RPG (aka ShARkPG), Tripwire Interactive and Deep Silver are excited to share first details on what players can expect from Maneater on Xbox Series X and PlayStation 5 systems. Fully evolved for the next generation of console systems, Maneater will support Ray-Tracing, native 4K HDR at 60 FPS, and new lighting effects that will bring the underwater world of Maneater to life as only the next generation consoles can. Xbox Series S owners will also benefit from increased graphical fidelity and frame rate. The PC version of Maneater will also be getting next-gen updates in early 2021 and more information on those enhancements will be coming in the next few months.

Players who currently own Maneater on Xbox One or the PlayStation 4 computer entertainment system can also look forward to a free, full upgrade, so when their console evolves, Maneater will too!

Next-Gen upgrades for Maneater will be available at launch for the Xbox Series X and Xbox Series S on November 10, 2020 – and for the PlayStation 5 computer entertainment system on November 12, 2020 (North America, Australia, and New Zeland) and November 19, 2020 (Europe).

Were you fully expecting to see Maneater join the list of games we can play at launch for these consoles or did you think it was stuck in its old waters? Do you think this could mean we might see some kind of expansion for it all or is it just to grab a new market of gamers? Will you be able to take full advantage of these upgrades at launch or will you need to upgrade your screen to be able to see it all? Let us have all of those thoughts and feelings down in the comments and then feel free to discuss it all. When there is more to share for Maneater, you know it will be on the site for you. Just be sure to keep checking in for all of that and more.