A Switch release for Oddworld: New ‘N’ Tasty is coming in October adding to the growing list of Oddworld titles on the platform

The headline says a good chunk of it here, as Oddworld: New ‘N’ Tasty will be making its way over to the Nintendo Switch in October of this year. One of the more popular titles in the franchise that Oddworld Inhabitants has placed out there for various other platforms and now coming to the Switch. I am not all that surprised with all of their past Oddworld titles making the leap over as of late. Maybe this will point to the upcoming one also having a release on this platform too. Maybe not. For now, we know that we are getting New ‘N’ Tasty over there this coming October with all the bells and whistles you would expect from an older title getting re-released on a new system.

If that only gets you partially excited, this version of Oddworld: New ‘N’ Tasty will also have a limited edition physical edition you can pick up if you do not want to go digital-only. This version will obviously house the game, some stickers, and a nice little keychain. Nothing overly flashy but still some cool little additions for those hardcore Oddworld fans to add the collections. Sometimes it is the little things out there that can be more satisfying than those bigger and more expensive bits other titles are throwing around as of late.

Oddworld Inhabitants’ critically acclaimed recipe for the action-puzzle platformer Oddworld: New ‘N’ Tasty will soon be available in Nintendo Switch flavor. Coming to retail and Nintendo eShop in October, and made from scratch, New ‘N’ Tasty serves up the freshest game ingredients such as organically grown and breathtakingly enhanced visuals and audio, grass-fed gameplay that is deeper and filled with piping hot delicious action, and a scrumptious story that if fans don’t eat up, the Glukkons may.

The physical standard and limited editions of New ‘N’ Tasty are available at retailers for pre-order beginning today. The action begins with our hero Abe serving as a simple floor-waxer at RuptureFarms before stumbling into a meeting and overhearing his boss, Molluck the Glukkon, discuss future plans to turn Abe and his fellow Mudokons into Tasty Treats as a final effort to rescue Molluck’s failing meatpacking empire. 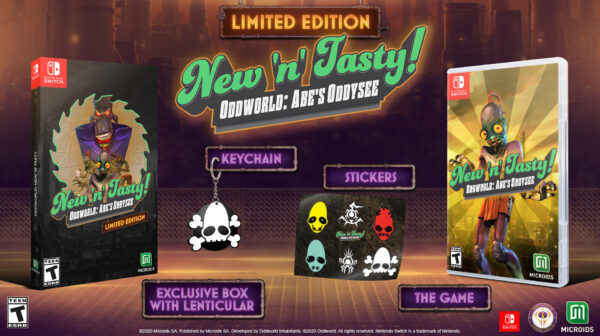 Co-published by Microids, Nintendo players must help Abe on his epic journey as he tries to escape his fate and save fellow Mudokons at RuptureFarms, and maybe even become something far greater than he imagined, a catalyst for change in the face of an oppressive world.

Will Abe change his fate, as well as the fate of thousands of fellow Mudokons? Will you be able to stomach Abe’s first step on his epic journey?

Or, will Abe go back on the menu!

Was it a huge surprise to see that we would be seeing this Oddworld title making the jump of platform or is it about expected now? Do you think this could point to the newer one to make the leap over at some point too or will that be years down the line? Do you like having these little extras over the bigger and flashier ones? Let us and the world out there know what you are thinking down in the comments and then feel free to discuss it all. If there is more to share for Oddworld: New ‘N’ Tasty, you know we will have it all here. Just be sure to keep checking in for all of that and more.