We sit down and review Chernobylite. A survival game set in a real-world setting. Here is our review of Chernobylite

The teasing and development for Chernobylite have come to a close and The Farm 51 is ready to show us all what it has. It went through a fun rollercoaster of events to get here with crowdfunding and a full publisher now, and we can finally enter the new zone. The zone here being a 3D scanned version of the Chernobyl Exclusion Zone that they placed the entirety of Chernobylite within. Was it worth the time, effort, and will it make for a great game? Well, that is why we are here to give you all of our thoughts on the game with our latest review. Then you will know if you should add it to the libraries on your PS4, PS5, Xbox One, Xbox Series X|S, or PC.

It has been some time since the Chernobyl disaster and everything that went down for that. Thirty years to be exact and now Igor is lured back by a picture and dreams of his wife Tatyana who went missing just before things went sideways. Igor needs to find out what is going on and enlists the help of others to get back into the Zone to explore, survive, and outrun what new horrors have popped up beyond radiation sickness. We are going to head into the power plant here and we need to be ready to take on what dangers are within. Be it the NAR defenses, the environmental dangers, or the shadows and Black Stalker that is wandering the lands. 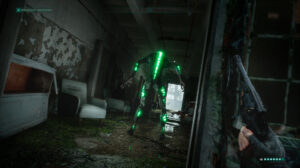 In survival games as Chernobylite is, one needs to be able to collect and gather all of the items needed to keep things going in and around our base. That is one of the points of these games. It is usually laid out there well from the start or we are left to fend for ourselves depending on the kind of game and story being told. In Chernobylite, it feels like Igor and his fellows would know what is needed to keep going but the game never tries to make sure that is the case. This leads to some weird confusion from the start where it feels like things are handled and we can be a bit more passive until your allies hate you or at death’s door without warning. There is no solid tutorial or walkthrough for this from the start but you will be penalized as if you knew it all. Not knowing that made me almost want to quit the game as it did not feel like the game knew what it wanted to be when it came to the survival parts of it all. It all became a bit of trial and error well past a point where it should have been.

Tailing off that, Chernobylite never felt like there was a great way to solve any of the problems or truly convey what problem was going on until it was too late. Companions get hurt on missions and their general view of us changes based on the condition of the base. This is not a hard thing to plan for in general, but here it felt so random and with no real way to fix it. For instance, I would have one of my companions go on a food run and they would come back injured. Sometimes their arm is in a sling and asking to be mended, other times looking perfectly fine but their health bar is next to dead. The latter also not offering up a way to fix any of it. This went over to their general attitudes that could lock you out of any kind of game progression without any options to help fix the radiation poisoning or what was causing the issue. It always felt random and when one needs to plan in a survival game like Chernobylite, this led to more frustration than any kind of benefit.

All of which always seemed to lead to my last major gripe for Chernobylite coming to full light. The game tasks us with sending our allies or ourselves into the mix to gather resources when not following the main storyline. Every time I took on these tasks, it was quite simply a short walk from point A to point B to collect whatever was out there. Most of the time not even encountering a single thing along the way, finding the stashes, and then portalling home. Something that could only ever be done once a day no matter how long it took. It felt like there should be no danger for any of the supporting badasses in Chernobylite to take on, yet our little scientist could do so without a scratch and bring home everything. While it did offer up a few new ways to experience the game, it felt disjointed and always a short deviation for something listed as taking days to do in the game. I understand why The Farm 51 did this, but I think removing it out to have us focus on the rest of the game would have been a better call instead of wasting time for us and making more sense in the narrative of the NPCs. 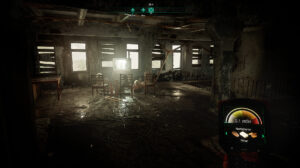 The first thing I will have to praise Chernobylite here has to be the use of the real-world setting and scans to help with the setting. Many of them look and feel like basic video game settings on the surface, but once you look deeper, you can see how the lands have been shaped and the care that the team took to help translate it all over. Especially when it comes to some of the finer details in the background or hidden places. I think the first time I came across the nuclear shadows on the wall, I had to stop and take them in a bit knowing that it was not some little detail added in just for Chernobylite. These are some of the last remnants of those that were on the site. Some of which were the families of the technicians that were not lucky at all to make it out of the zone. I know I would love to have a solid walkthrough of all of that, minus the rest of the video game horrors, as we have seen in other games before now. Especially, given how rare it is that we can let anyone in to scan things like this in the real world.

That part aside, once Chernobylite is up and running and you can get your footing with the survival aspects of the game, it flows rather nicely between all of the resource management and allies within. All to the point that if there was a better amount of time focused on this from the start, none of my above issues with it would have been valid at all. Everything down to the cosmetics of the game and choices in the base has to be thought about and looked after, and there is some form of benefit from all of that beyond just experiencing the game. Sometimes it can be something as basic as keeping the NPCs from being snappy with their dialog responses to keep you looking after things, but it works. Especially when we have to move outside of just managing water, power, and food in the bunker. Everything has a sliding bar and effect on the game and that becomes one of the better aspects of it all once it is understood and time is given in Chernobylite.

Last up is a feature that I loved and wish to see in more games beyond Chernobylite. That would have to be the way things are upgraded in the game in terms of Igor’s skills. There is a bit of a skill tree in the mix of it all, but it is not a point-buy system where you magically are better “for reasons.” In Chernobylite, you have to get your allies to help train you in those skills, and then when you spend your points, the game forces you to perform them to show you not only how to do it but make sure it is tested out. It is an interesting concept to see and then experience in a video game, for sure. The first time I tried to upgrade a stealth skill, I was shocked to find the game telling me to prove I could do it before it would give it to me. A nice bit of world-building but also help the player understand what to do beyond watching a video of it in the game. If only the rest of the game had something closer to that for all of the other meaty bits we had to worry about. 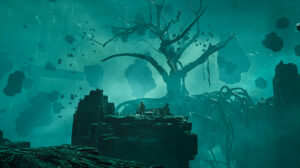 The bigger highlights for Chernobylite were always nice to have but always seemed to be dwarfed by some of the bigger issues I had in the game. Yes, it was nice to walk around a location that most never will while in a virtual space or play with the way that skills were handed out, but I always came back to being lost in the game and had a lack of preparation for what was needed to be done. This was only highlighted by the hot and coldness of the NPCs in the game that offered up very little in the way of useful knowledge. This coupled with the way missions and errands were run while trying to make sure our bunker was always up and running. Even for a survival game as Chernobylite is, it did not function as well. Had it focused more on the horror aspect of it all with the survival floating in the background, I think this would be a must-have for everyone. Given that is not the case, I can see those that love survival games, in general, will have fun with the new location but those dipping their toes in will be lost and slightly upset when they cannot continue the narrative of it all.

Chernobylite was developed by The Farm 51 and published by All In! Games for the PS4, PS5, Xbox One, Xbox SeriesX|S, and PC on September 28th, 2020. A PlayStation copy of the game was provided by the publisher for reviewing purposes.