We sit down and review Dying Light 2. The zombie, parkour title is back to keep us all running. Here is our review of Dying Light 2

The IP that started a nice line of games out there is back with Dying Light 2 rushing out to us all. The title that blends some of the parkour running, zombie horror, and FPS style of gameplay that we have been waiting for is ready to take us back in and to a new location. All after all of the hardships and work that Techland has gone through. We have been fairly excited to get our hands on Dying Light 2 since it first showed up, so now it is time to see how the game played out. Here is our review of the game and how well we were able to stay human in the game and put some of the changes to our advantage.

The world of Dying Light seemed like it was a bit more contained out there, but it should have been assumed humans were going to human out there. After some shady things go down, the infection has spread out to the rest of the world and fifteen years have gone by. This is where we pick up with Aiden, a Pilgrim with a shady past that is out to find his missing sister. Thankfully, he is a very skilled runner and jumper to make sure he can survive outside of the walls and try to help or hinder everyone else along the way. But will he survive the night…? 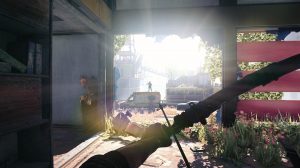 One of the things I generally dislike in games like Dying Light 2 is that we have weapons degrade over time. It does add a bit of realism to the game and adds to the horror, so I get it, but before there were always ways to fix and repair them over time. For some reason, in Dying Light 2, that feature has been removed. This would not be a huge issue except for the fact that there is a whole crafting system around the weapons to make something a bit more custom to your character. What is the point of all of that if there is no way to keep anything going longer? There also seems to be no way to further upgrade once better options are unlocked. It becomes increasingly frustrating as the game progresses and you have to try to scrounge up something similar later on. Especially since this could have been a simple addition to increasing the durability back up.

Granted, the above is more of a nitpick than anything game-breaking, as I always found the combat in Dying Light 2 to be just about as clunky as it was before. It is still fairly simple with blocking, dodging, and attacking, but it feels like most of the swings and moves are just so very random. Sometimes the weapon will slide right off the armor or infected skin and then other times it will make an arm or head go flying right off. Not to mention that it always feels so chaotic that it is hard to make any direct attacks. This led to me using the flight option as much as possible in Dying Light 2. Not that it is a bad option, but there are some instances where combat is forced and it is more of a frustration than adding to the intensity of the game and horror.

Speaking of the intensity of Dying Light 2, while the gameplay has that is spades the way the story is mostly delivered feels like it drops the ball. Outside of the bigger cut scenes and most of the dialog and exposition feels flat and more as if someone is just reading a page to you. Aiden and Lawan are the only characters that seem to have any sense of personality to any of the game. One would not think this is a huge issue, but I found myself getting bored with the story when it came to talking to any other being in Dying Light 2. This struck me hard when there was a mission where Aiden needed to call in Lawan for clarification. The interaction there, while short, brought me back into the scene only to be lost once it went back to the basic doctor talking again. Again, not a game-breaker, but when things start to get grindy, I found myself wanting to skip scenes due to the lackluster deliveries. 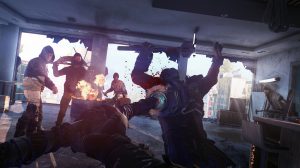 When it comes to the parkour in Dying Light 2, it is truly worth noting what Techland has been saying from the start. It is easy to use but hard to master. I am glad I went into the game thinking that or I would have set it down as it is a bit rough at the start but once you get the flow going and learn the world, you will find yourself wanting to run everywhere. That is even before any of the parkour skills start to get unlocked along the way. That is when the true fun of Dying Light 2 starts to flow in. In fact, it became one of my favorite aspects quickly after where I wanted to learn the systems better and unlock it all. As long as you know all of that, you should see the same thing as I did after a bit of frustration. Then you will see it flow as a bit of a challenge you have successfully worked through for the fun of it all.

Another aspect that I thought I was going to hate in Dying Light 2 was the fact that we have more to worry about at night. I was one of those players that usually went out during the day in the first game and was dreading that there was going to be more of it forced in this one. Not to mention that we have an infection resource that we need to worry about when not in the light too. While I still generally went for the daytime option, I found the night missions, events, and wandering in the dark buildings to be the proper level of intensity to keep it all going. Even when using stealth to move through the areas in Dying Light 2, just knowing that Aiden could die for just surviving gave a nice little bit of horror for those that generally can not handle the bigger bits. Not to mention to make us all feel a bit more in touch with the character while trying to scrounge and make it back into the light.

Dying Light 2 also had me a bit worried that we could see some of the same grinds that we had from the last title. That is in there a bit with some of the collectibles and other items out there, but the benefit is that the team has made some great strides to make it all feel different each time. Need to unlock some new windmills in the game, get ready for a vastly different parkour challenge to get to the top. Need to go find and collect a few things, do not expect any of them to play the same way. Even though they were generally fetch quests or slugfests, they never truly felt like it was the same thing as the last beyond the start and finish. So many games get it wrong out there when it comes to an open world, but Dying Light 2 does it so you want to keep trying to collect and unlock everything instead of just leaving things until you need it. Not only through side missions too. 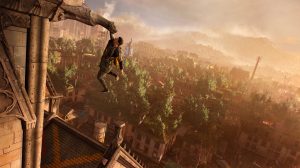 At the end of the day and after all of the wait we have had for Dying Light 2, one would expect it to be a perfect game. It has a few faults and can feel flat a few points, but at the end of the day, it is still an amazing game and experience to have. The combat will not be for everyone out there but, then again, neither will the parkour out there. You will be able to find something to enjoy in the mix as long as you are into the genre and style of the game at the very least. Add in the fact that all of the missions and events truly do feel new each time too, you can lose yourself to that grind and never notice it. If more of the exposition and acting of the NPCs popped more, Dying Light 2 could be as close to a perfect title as we could have hoped for. Especially since I am already jonesing to get back to playing the game after writing all of this. It will be worth your time and money.

Dying Light 2 was developed and published by Techland for the PS4, PS5, Xbox One, Xbox Series X, and PC on February 4th, 2022. A PS5 copy of the game was provided by the publisher for reviewing purposes.