We sit down and review Evil Genius 2: World Domination. The Evil Base simulation game that we have all been waiting for. Here is our review of Evil Genius 2

It is finally time for us to try to take over the world with the release of Evil Genius 2: World Domination on the PC. The base-building title is back and it looks like Rebellion is ready for us to try to hatch all of our evil schemes on the world and create the most elaborate death traps for the force of justice. Something that has been a long time coming since the launch of Evil Genius so long ago. We were able to dive deep into this title to see just how it all went down and if it will engage you for the same hours as the last one. Here is our review of just how well this title does.

The world out there is filled with all kinds of justice and heroes and we just happened to find a secluded island out there. A nice little place to call home, run a casino, and try to take over the world for not letting us in on the politics game. Sure, we may have tried to bribe our way in to be president of the world, but if they are going to decline it all they will have to deal with the consequences. We are an Evil Genius after all and we need to be seen and heard on the world’s stage. 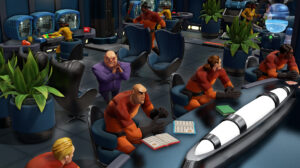 There was not a whole lot of Evil Genius 2 that bothered me, but when there was something, it stood out. In this instance, it has to come down with tracking all of the evil schemes we are going through on the world map. In a game that generally has us all micromanaging along the way, it seems odd that there was no real easy way to see what was and wasn’t running out there. The world map is split amongst multiple regions and each needs to be monitored for “Heat” and ways to make money. While there were notifications to tell you when there was something to keep an eye on, it was insanely hard to do so. It was more of a pixel hunt to see what was going on there and if there was nothing going on. Not a huge deal if it was not for the fact that we also need to keep an eye on all of the things going on in the base in general. My base was raiding too many times without notice as I was too busy searching for these opportunities. While there is a way to pause all of that action to better fill the time and keep these agents from investigating, it also pauses all other progress and not always optimal.

Speaking of the agents, while it is expected and should happen with the raids, there never felt like there was a way to put all of our Evil Genius skills to the best use for them. That is, no matter how well I seemed to set up security and staffing, I always seemed to find random agents without disguises wandering about like they owned the place. There is even a huge emphasis on setting up security in Evil Genius 2, but it never seemed to do a thing even when I had every angle covered in cameras and guards at attention in the hallways. Unless I specifically tagged the agents for a certain action or went into Red Alert, they were treated better than the tourists that flooded into my cover operation. Maybe I missed something during the tutorials, but it never seemed to correct along the way or even after getting the henchmen to help out along the way. This never came across as a challenge but more of a nuisance that would just always be.

Finally, and speaking of henchmen, while we have seen various different characters and their abilities in the marketing for Evil Genius 2, they never truly felt as different or worked to the same extent we have seen. I only found that the difference came to voice, text, and art with the mechanics they use always defaulting back to shoot first and ask questions never. Sure, they do have special abilities that we can use but none of them ever seemed like something worthwhile when they were used or that they did anything that actually helped. The Fan, for instance, has the ability to detonate weapons on the target and to lower suspicion ratings on specific targets. If you can actually catch things going on to micromanage like that in Evil Genius 2, these both felt like just fluff. The damage done with a timed special was no more than just pig-piling with guards and by the time we knew an agent is there, there was no reason to lower suspicions. This carried over to the other henchmen I played with too. This would have worked better if they did these things without me having to give orders as there was so much else to watch that they always went unused. 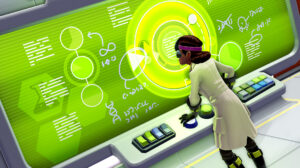 When it comes to base-building titles, Evil Genius was always one that I went to as a suggestion. When it comes to a title in the modern era of gaming, this is definitely taking that spot again as it is done extremely well once again. Even if it feels a little off to have multiple rooms that do close to the same thing, it adds to the fun of not only making the look of it all but planning well ahead. It is all about efficiency and once you move into the free-building of the game, Evil Genius 2 shines extremely bright. It was always fun to figure out how and where to place things to make sure they not only gave us the best bang for our buck but to plot out how to confuse enemies that may have broken in. After the first time I encounter the Rogue Agents, I dedicated an entire floor for my vault with a maze of hallways, doors, and traps, to keep my things safe and also test their resolve along the way. I may have spent way too much time doing this, but that is kind of the point in a game like this.

Moving into the traps for Evil Genius 2, while the guards, minions, and henchmen did not seem to be the ones that were up to protecting the base here, this is where a good portion of the fun does come into it all. As I mentioned, I spent a whole lot of time building a death maze for when those agents did break in and tried to steal my gold. It was a whole lot of fun trying to plan all of this out and then watching everything get triggered along the way. It was always satisfying to watch as an agent was punched with an oversized glove to only be knocked into a shark pit. That or to build the poison dart run that we have seen in so many other forms of media before. This time in our own hands in Evil Genius 2: World Domination to see if we could do better and kill everyone that goes through it. This could have been just a trap building title and based on what we have, it would have done amazing just on its own. I am thankful we had more than that as it would have felt a little out of place with the stylized era of everything we had in the mix too.

Segueing into that now, Evil Genius 2 also offered up that classic feel to the genre it was all inspired by. That be the classic spy films and stories that were set in the 60s and 70s. The design of the rooms, devices, and even the little extra bits of furniture let you have that fun many of the older gamers grew up watching. It is even fun for some of the younger generations that grew up with more of the gritty version, as it has always been a genre that knew where it came from and plays upon it all. Mixed in with all of the base-building Evil Genius is known for, it was a perfect marriage that kept me engaged and decorating everything to my heart’s content. Even when it came to things that had no mechanical bearing on the game too. It is a game about being an Evil Base interior designer to a bit and Rebellion knocked it out of the park once again in that ring. Once you are able to fully create in the game, it is not surprising to see that you can pause the action to build only to find out you went way over budget and need to do more evil to see the creation come to life. 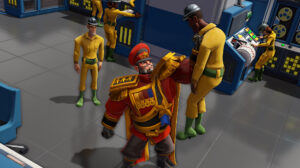 At the end of the day, if you are looking for an evil base-building title out there, Evil Genius 2: World Domination is going to be the one I will say to go with. It is not without its own issues and quirks, but when it shines, it shines brighter than freshly polished gold. Do not expect the game to easily force-feed you the action and experiences, but know that it is not overly difficult to set all of that up on your own along the way. As long as you focus more on the base-building and let the numbers crunch themselves, you will have a blast with it all. It is when you start to venture outside of that, that you will start to see the seedy underbelly of the game that needs a bit more to be desired. That is my take on it all at the very least.

I give Evil Genius 2: World Domination 86 Evil Schemes on the Evil Scheme scale.

Evil Genius 2: World Domination was developed and published by Rebellion for the PC on March 30th, 2021. A PC copy of the game was provided by the publisher for reviewing purposes.