It has been a good clip of time since we had a good puzzle game, but now we have Faraday Protocol that is out there. Well, it has been out there for a while now but it is getting a new surge with the latest updates that Red Koi Box has out there for the game. It is also another one that fell to the backburner here even if Faraday Protocol is one of those titles that sounds like it would be up our alley here. This is why we took the time to play the latest version of the game to see how it is flowing. Get ready to see if it will be a title you want to dive into right now too. Here we go with our review of how this title is going here.

It feels like it would be business as usual for Raug Zeekon here given that they are an interstellar archeologist that finds them self on a new planet. On that housed an alien civilization and all kinds of relics. Not only that but also some massive towers that seem like they have more to offer up. This is where Raug sets forth to do the job, finds the Bia Tool, and stumbles across a mysterious voice called IRIS. One that seems to want to help guide Raug through the world and puzzles out there to help find their final location. Something sounds fairly familiar here for Faraday Protocol does it not? 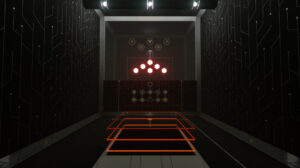 To kick things off here, I will have to dive into some of the controls in Faraday Protocol and how we will need to manipulate things with the gun and buttons out there. All of which could have been something easily explained from the start with a good tutorial, but there is not one in the game here. Instead, we are left to figure out how to manage the different colored energies we can absorb and the different ways we can fire things off. All so we can turn dials and push buttons that may open things up or allow us to progress. This is part of the core of Faraday Protocol and I understand not holding the hands in a puzzle game, but when you are halfway through the game and still not certain how things work, it feels more like you luckily stumbled through it all instead of expertly figured everything out. That was at least how it felt to me.

Building from that, there also seemed to be a bit of an issue with where to go and what to do in the levels and areas of Faraday Protocol. Again, it makes a bit of sense for a game like this, but some of the puzzles out there did not present anything near to an objective and could lead you to spend hours thinking you missed something or went the wrong way in the game. Even in titles like Portal, there was some basic indication on which door you needed to unlock. In Faraday Protocol you have some of that, but I found most of the areas that were not long corridors or single rooms hard to figure out and just left me hoping for the best. Again, not great if I am supposed to have a feeling of accomplishment at the end of it all and not scratch my head on how I solved things here.

All of this builds back into another issue I ran into for Faraday Protocol multiple times, the game needed a bit more in the way of QA to make sure you did not clip into an area you shouldn’t be in or trigger a bit of audio that needed to wait. I found myself shunted into rooms that were not part of the game a few times and given that there were few cues on what to do, I would wander until I opted to take a break and turn the game off. Only to have myself loaded in a whole new section of the game where I was supposed to be. I even triggered a full cut scene in the game that threw me into a freefall outside of the maps even though I was following along the paths I could find. All of which can be fixed for Faraday Protocol, but worth noting for those looking to jump in right now. 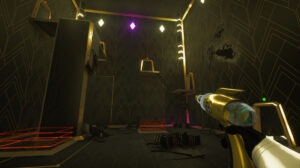 I am not going to spoil anything for the story of Faraday Protocol, as that was a true shining part of the game here. Just as the aforementioned title above, it dives into a few of the fun thought problems out there in the world and has us play through some of them. It does take the full game to get to the endpoint of it all, as should be assumed, but it does offer a fun take on things out there. I will not say much more on the story so you can enjoy it all on the first play of Faraday Protocol, but it is one of those that will have you playing at least twice. Partially due to the different choices you can make but also to see all of the little nuances you might have missed along the way due to the puzzle-solving and other bits of gameplay you will need to focus on.

While they were hard to figure out in terms of goals, the puzzles in Faraday Protocol did have some fun little twists and solutions for us to figure out as we fought through. Just like the many other titles in the same vein as this one. Even the ones that felt like they were a bit on the repetitive side, always felt like it was new or had an interesting solution to it all. It was a lot more than just the basic physics puzzles or light-up games we have seen time and time again. Faraday Protocol did a great job of mixing things up when we were able to understand what to do. In those instances, there was a great sense of accomplishment once you figured out how each of the alien symbols worked into the bigger puzzle. That or which statues needed to be fully utilized to store energy or if there were any red herrings in the mix. 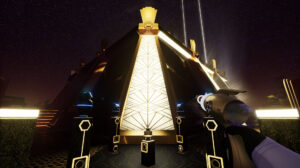 At the end of the day, Faraday Protocol is a fun little puzzle game with a very intriguing story built into it all. If you find yourself enjoying titles like Portal, then this one is going to scratch that itch you may have had for a while now. You will need to look past some of those pesky bugs that are still plaguing the title as of this review, but knowing that you can just reset the game and it will correct might save you some hours of wandering. Not to mention that sometimes the easy answers in Faraday Protocol are the correct ones. It is not something that you will need to overthink. Even with its issues, it is a title I will recommend if you need a few hours to waste or to help take a break from other games out there. It does not feel like one that will be influencing pop culture as we have seen with the others, though.

Faraday Protocol was developed by Red Koi Box and published by Deck13 for the PS4, PS5, Xbox One, Xbox Series X|S, Switch, and PC on August 12th, 2021. A PlayStation copy of the game was provided by the publisher for reviewing purposes.