I was really equal parts excited and worried about Horizon Zero Dawn’s new DLC. Would it be an overpriced cash grab for Guerrilla Games to scrape a few more pennies from fans, or a story that needed to be told that didn’t fit with the flow and progression of the main game? I try not to delve into the main plots of games too much, but if you’re buying the DLC I am going to assume you have played Horizon Zero Dawn. So if you just want to know if I recommend it or not I’ll save you sometimes and say yes. Though I did enjoy The Frozen Wilds very much I would be remiss if I didn’t at least point out its flaws as well as triumphs.

The biggest problem I had was the inconsistent period the story was set in. It seemed to take place close to the end of Horizon Zero Dawn’s main quest, but still far from its end. When Aloy speaks to Cyan there is no mention of Hades or anything like that, but on the other hand, her dialogue suggests she has been doing this for a long time. Even the level suggestions for the quests can’t make up where this takes place. Some quests say you need to be level twenty-five while the end quest recommends you to be level fifty. It could take place after the main quest, but then why would she be talking to Sylens and still be oblivious to what the machines are? This probably won’t be a gripe for most people, but the story was a big part of why I liked the main game so much to begin with. 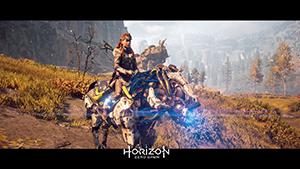 The Cut, home of the Banuke tribe, is where The Frozen Wilds takes place. You go there to research rumors of new machines. When you get there smoke is pouring from a mountain while the locals talk of a daemon corrupting the machines. For some arbitrary reason, instead of the already established corruption found in the main game, they changed the color and replaced the corrupted zones flower like towers that can heal the daemonic machines. You can override these towers to stun the surrounding enemies, but it was much more expedient to stay out of range snipe the tower while the machines ran around gormlessly searching for you in the same two square feet until you finished pumping them with enough arrows to build a small raft.

The combat in The Cut is turned up to eleven. I didn’t like the Cauldrons for the simple fact that no matter how interesting they were it always ended the same. Facing a machine that is difficult enough in an open area where you can actually maneuver around the creature in the tiny room. This DLC suffers a bit from that. At the end of the mission where you challenge to become Werak, they pull this crap. Turning what was a large open expanse moment ago into a tiny combat arena with three of the powerful new Frost Claws. My biggest recommendation is to wait until you acquire the Shield-Weaver outfit before attempting to brave The Cut, because I would regularly switch but to my outfit for certain parts I needed to sneak through and if I had to fight an enemy I would lose almost my entire health bar in a few hits. Mind you this isn’t even with the higher difficulties either. While this can be annoying it still isn’t a deal breaker. I never got stuck anywhere for too long.

Now we will talk in depth about the main story, so if you don’t want any spoilers to skip this section. The people of Horizon Zero Dawn are very luck Aloy is the Philanthropic type. If anyone has the slightest problem at all, she is the first one to jump in and help. It makes you wonder how anything ever got done before she existed. There is a token amount of side quests that spur out from the main quest. Taking everything from the main game and making a smaller bite-sized portion of it. If you stick to the main quest, The Frozen Wilds will only last you around five hours, but with Horizon Zero Dawn, it sucks me in and on my way to one-hundred percent completion. I have already racked up nearly fifteen hours and I am still missing some things.

Your first task is tracking down the shaman of Aratak’s Werak since she knows the most about what is going on at Thunder’s Drum. Once you find her at an old world facility going on about a spirit that later turns out to be an artificial intelligence subordinate function of GAIA. She tells you in order to stop Aratak from leading more of their tribe to be slaughtered at the mountain you need to challenge him and become the leader of their tribe. Something at first Aloy tries to resist. 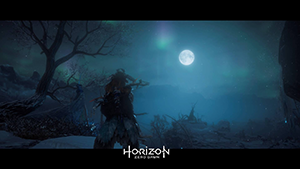 Upon returning you find out the shaman Ourea is actually Aratak’s sister. Once your things get sorted out among them, the Three Musketeers venture off to fight their way into the mountain in order to put a stop to whatever is causing the imbalance in the machines. Inside the facility, you learn a long time ago that the scientist there were stabilizing the mountain from during a time it caused a huge hazard to the inhabitants of the surrounding area no under the control of an AI called Hephaestus. Its job was like many AI’s gone bad in fiction was innocent at first. What started out as making simple machines that resembled prey animals such as deer turned into something much more sinister. As the humans started hunting machines for scrap, this angered Hephaestus so he started building more ferocious machines in order to deter the continued pain inflicted on his creations.

After fighting their way to the center of the mountain they find the core itself, Aloy is able to override it, thus allowing CYAN to cause a meltdown destroying the facility. Hephaestus was defeated, but at the loss of Ourea. This results in Aloy suggesting that CYAN share her knowledge with Banuk people in hopes the knowledge will spread and benefit everyone.

Back when I first got Horizon Zero Dawn I met it with a cautious optimism. I did the same with The Frozen Wilds. Both times I was completely blown away by every aspect. Even with what little nitpicks I could come up with, none of it really detracts from the fun I have playing this game. The Cut is a gorgeous piece of scenery with its snow-capped mountains, and hot springs. If you haven’t played Horizon Zero Dawn and own a PS4, you need to. If you are indecisive on whether to buy a PS4 or Xbox One then I would consider this exclusive to far outway anything the Xbox One has. Though since the Complete Edition will include this and is less than a month away put it on your Christmas list!

Horizon Zero Dawn: The Frozen Wilds was developed by Guerrilla Games and published by Sony Interactive Entertainment for the PS4 on November 7th, 2017. A digital copy of the game was purchased by myself for reviewing purposes.