It has seemed a bit on the few and far side of things for Ubisoft to lean into a title that is not one of their established IPs as of yet, but here we are with Immortals Fenyx Rising. A new platformer out there with some fun little twists mixed into it all while it takes a fun approach at telling some of the Ancient Greek stories. A topic that is always near and dear to my heart here and will get some close attention. All wrapped up in gameplay elements that seemed like they wanted to be tried in their other IPs but were left for Immortals Fenyx Rising to give them a go. Sit back and get ready for our review of the game on the PS5 so you can see if it will be worth your time and money.

We are again whisked back to the time of Ancient Greece and where we get to meet Fenyx. A Greek storyteller that was the lone survivor from a shipwreck and now on their home island to find a past Titan is back, the Gods are mostly missing, and everyone has been turned to stone. Not by the beast that you would assume, but through a curse out there that Fenyx must also try to figure out how to fix. There is a lot on the plate here, but thankfully we have Zeus and Prometheus to narrate our every move and action along the way too. Can Fenyx save us all? Maybe…

To start things off here, I will have to say I only ever found one big issue with Immortals Fenyx Rising with the rest being more nitpick or annoyances than anything. All of which has to come down to the way the sound in the game overlaps itself or seemed to have stuttering issues during my time in play. The stuttering seemed to go away when restarting the game after prolonged play, but the other issue always seemed to plague at the wrong times. In a game that is having fun with its storytelling, it is something that should have been functional at the beginning of Immortals but always seemed to creep in. These would be things like background effects and noises that cannot be silenced still playing during dialogue scenes, which often led to the characters getting drowned out. Gods forbid there was a Wraith in the area having things storm down while trying to listen to the exposition needed to press forward in the game too. It felt like a rookie mistake to have happen here and it is something to keep in mind when trying to move along with the story as it is a big issue for the fun of it all.

Now that we have that out of the way, I will have to tackle the gear and weapons we are able to find and use in Immortals. They do offer up more than just fun cosmetic changes for Fenyx in the game by adding or modifying stats, so that is good. There was just an issue with any of them offering anything better than what you get at the start of the game in terms of stat or ability bumps. In fact, I never changed out of the starting gear because it offered up the best boosts while only changing out the cosmetics when I found something that fit my tastes more. It just always seemed that the gear I found always offered up something I would never use in Immortals here so I always went back to the items that gave me the health and stamina bumps while relying on the potions at hand to boost everything else I had going on in the game. I liked what they were going for, but it never seemed to make a solid chance to warrant me swapping besides to look cooler in the game.

The last main gripe I have with Immortals Fenyx Rising, has to come down to the way you discover events, items, locations, and etc. in the game. You have to go into something called Far Sight to survey the lands out there. Usually after going through the motions of the Assassin’s Creed synchronizing climbs. While the climb would remove the fog of war on the map, it never showed off where anything was until you played the pixel hunt game in this Far Sight mode. This is something that would have felt more at home in any of the serious style games that Ubisoft has out there and not in the playful one we have here with Immortals. It was almost like they needed to add in something tedious to break up the fun flow of it all and for no reason. Something that could have been forgivable if there was a better way to uncover things as you get closer to the end of the game besides a giant pixel hunt that could have in-game items hiding the thing you are trying to spy too. 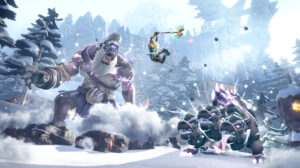 It has been a long while since I had a game approach the storytelling style of things as Immortals Fenyx Rising did. It is a bit of a satire while adding in some fun commentary on the messed up things that are in the Greek Stories out there. All done through the narration of Zeus and Prometheus. Also done in a fun and comical way that also has an impact in the game world besides just having little bits of exposition over things. I mean this in the way of Zeus getting bored in the story and then declares more enemies show up for no reason. That or things like memories coming up as the deities are talking and the game world alters a bit to fit the story being told. I am looking at you giant pearl that rolled by for no reason. It was as if Immortals Fenyx Rising knew the fun it could have with the player and then did not hold back while breaking that fourth wall ever so slightly. I would be lying if I said I did not have a snort-laugh quite often while playing the game. Something that always brought me back in, even for the tedious parts.

To go along with all of these fun storytelling aspects in Immortals Fenyx Rising came some fun platforming and puzzle-solving to go with it. In addition to all of the fast-paced combat we had too. At the earlier stages, it can be a bit tough to master, but the learning curve and game aids us along so you never feel stuck or unable to do the task at hand. It even goes as far as to tell you that something is currently impossible because you have yet to unlock or master the skill needed. I have experienced this in other titles, but Immortals always offers everything up to make you feel like you accomplished the task while not feeling like a dullard to figure it out. All done through some crafty level and puzzle designs that feel like they are a fresh take on things we have seen just thrown into other titles in the past. I wish other games out there would try things like this and not just try to force the same tired stuff down our eyes every year. The irony is not lost on me with that statement, but it is something needed to be said here.

The last big praise I have for Immortals Fenyx Rising here is that the game offers up a whole lot of different play styles and events to keep us engaged even if the core idea is the same. If you want just a hack-n-slash style adventure, you have it here. If you want to search the world for hidden items to place back where they belong, it is here too. Even if you miss the classic slide puzzles from so long ago, the game has you covered. Mix in some fun trials that offer up the same variety of things and you will never be missing some form of gaming in Immortals Fenyx Rising. Even to the point where you have your set routine, the game offers up things to try to break it up so it is never the same rinse-repeat gameplay loop for hours and hours. Each of the collectibles has something to offer up to claim them; be it different combat, puzzles to solve, or trial to run through. We get a solid mix between it all and you are never forced into a specific corner along the way. 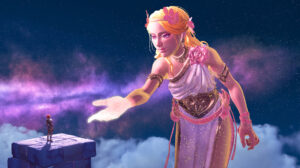 I have to say that when I first saw Immortals Fenyx Rising, I rolled my eyes at the idea and thought it was going to be another game lost in the mix. Having played through it all, I am singing a completely different tune. Think of a kid-friendly version of God Of War with lost ideas from Assassin’s Creed mixed in with some intriguing puzzles to solve and you will be close to what Immortals Fenyx Rising is. It is a game that I feel extremely confident to recommend to everyone out there that even remotely enjoys this game style in any way. Even if it is just to have fun with the story and fight through the gameplay elements, this one is worth the time and money. I am already ready to head back in and give it a go for a second time with how much fun I had with it all. You should join in and see just what I am talking about. Even if we might have to wait a bit longer for the audio issues to get patched out.

Immortals Fenyx Rising was developed and published by Ubisoft for the PS4, PS5, Xbox One, Xbox Series X, Switch, and PC on December 3rd, 2020. A PS5 copy of the game was provided by the publisher for reviewing purposes.