Remakes and remasters are still all the rage as we march forward and here we go with Kingdoms Of Amalur: Re-Reckoning. The remaster of the game with the same title from 383 Studios that THQ Nordic has put out there for us. Rumors started back when they picked up the IP for Kingdoms Of Amalur that we might see more for the IP and here we go with the remaster of it all. It was a title that had a rocky start and reception, but does bringing it forward to the PS4, Xbox One, and PC again hold up? That is why we are back with our review of how it all went. Sit back and get ready to see if it will be worth the time and money to sink in hours of gameplay again.

You are the “Fateless One.” A mortal that dies and came back through some kind of mystical means to head back into the Kingdoms Of Amalur. Things are not going so hot for so many in the lands, be it Fae or other beings, and you need to help out as one that has defied all of the normal rules to mortality. You may be claimed to have no fate, but it looks like you will make your own as you take on the different roles that the game asks and offers up to bring down another ultimate evil ravaging the lands out there. The traditional hero story in the fantasy medieval setting we know and love. 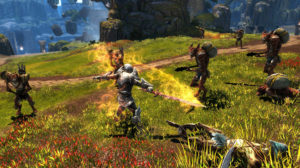 One of the things that we usually look for in these remasters is that the visuals will have a huge change-up and boost. Given the art style for Kingdoms Of Amalur in the first place, it was not a huge surprise that we might not see a vast change in things. Something that seemed to also follow the place of just being upgraded enough to not look too fuzzy when on the more modern systems and screens out there. I was not expecting anything as we should for a full remake when it came to Kingdoms Of Amalur: Re-Reckoning, but it would have been nice if there were some changes mixed in. Instead, it was just made to run on the systems as mentioned all while keeping the look and feel of the older systems. Even down to the basic particle effects and other elements in the game’s world. Almost as if it could have been played if the PS4 was fully backward compatible instead of needing a remastered version. Not the biggest of issues, but it was a bit off-putting that it was about the same as so very long ago.

Another part of the Re-Reckoning that kind of did not sit well was the power level change that seemed to be lost here since the first time I played Kingdoms Of Amalur. I remember before having so many issues of surviving through missions and actually having a challenge with the combat and earning better gear. This seemed to be lost from the start for me as shortly after leaving the tutorial section of the game I was met with having gear that made me a killing machine and removed any kind of challenge. Even as a rogue/assassin path I chose to walk down is slightly geared to a stealth one-hit-kill, even when raging in with dual daggers, I was killing almost everything in two or three hits. It did allow me to experience more of the story that Kingdoms Of Amalur had to offer, but it quickly shifted into a small fight to dialog dump, to repeat. Almost to the point that it became more tedious to fight than to actually play the game more than exploring the world. 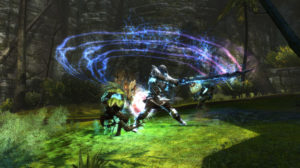 Hands down, the story for Kingdoms Of Amalur is fun and unique to experience. This is how it was the first time around with everything, and it is nice to have the ability to go through it all again without the need of going back to older hardware. It truly shines again in a world where we get the same old story so many times, but in this one, it always felt unique. Even for those that may have missed out on the whole thing or even parts of the story from before. That feels like the big reason that we have Kingdoms Of Amalur: Re-Reckoning here, and it pays off. All without needing to rely on the usual nostalgia to pull us back in and experience it. Sure, it does that to an extent but for anyone that has not experienced it before, it will do it all just the same. Even with all of the different dialog options and actions that can be taken in the game. Just be sure to stick away from any spoilers out there to get the full experience for the first time.

Another aspect that still seems to hold up well here for Kingdoms Of Amalur: Re-Reckoning has to be the character progression system we get to go down. It worked well before and it looks to have carried over completely with a few tweaks that fixed a few issues out there from the first launch. Kind of how the whole remaster thing worked here with bugs getting fixed or removed. Even though there is a set number of ways to upgrade and progress in Kingdoms Of Amalur, each always felt to have an impact and a need to be in there. Unlike other titles where they add things in that barely add anything to the gameplay or fun. Almost all of the upgrades do more than alter some numbers behind the scenes. This was a concern of mine as I have seen this be the case in other remasters, but the team saw what worked and carried it right over while fixing the small things that I had issues with so long ago. 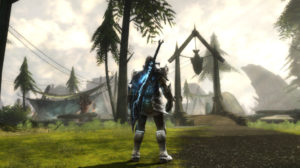 Kingdoms Of Amalur: Re-Reckoning really does not feel like it has anything added to it besides the new platforms to play on and the ability to look as good as it did before. If you missed out on it when it first launched, it should be on your list to sink hundreds of hours into yet again. If you did experience Kingdoms Of Amalur already and not looking to bring it to the latest consoles, you might want to skip it as nothing has truly been added or changed to make it feel like a new experience. Not that it is a bad game at all, but I can see one being let down that they have paid for the same experience once again. It holds up, just not to the point where non-diehard fans are going to need to rush out and pick it up once more. Do as you will, though.

I give Kingdoms Of Amalur: Re-Reckoning 73 Skill Points on the Skill Point scale.

Kingdoms Of Amalur: Re-Reckoning was remastered by Kaiko and published by THQ Nordic for the PS4, Xbox One, and PC on September 8th, 2020. A PS4 copy of the game was provided by the publisher for reviewing purposes.