It seems like so long ago that we had the original Layers Of Fear made a splash and offer us all a new way to go about some of the horrors out there. It was not the bigger title that did all of this, but it was a smash hit and delight to see what Bloober Team was trying to do with the genre and ways to offer up horror to the gaming fans. Then we cut forward a few years and after the big VR crazy hit, and now we have Layers Of Fear VR. More recently, the version that launched onto the PSVR to allow many gamers to give it a shot and at a lower cost of entry with the tech. It is out there, we have played it, and now we are here to let you in on our full review of it all. Strap on the headsets and get ready to see if you should walk back into all of that fear.

Once again, we are back in the 1920s and our unnamed protagonist is setting out to create his Magnum Opus in his selected art medium. He is a painter and needs to make sure the world gets the best version of himself out there. Especially since his wife and child seem to have fallen to some horrible end and he is left all alone in this world. Touching paint to canvas, though, sparks all manner of visions and sights that both intrigue and haunt our artist’s mind. Does he force himself to work on just his art or venture into the weird world that seems to be within his walls now. Could he just be going mad this entire time? It is time to find out and finish this painting while trying not to run from it all in fear. 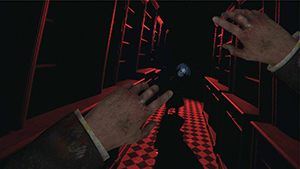 One would think that adding the VR level of immersion into a game like Layers Of Fear would be cause to add in all forms of stress to the player. I played and enjoyed the non-VR version of the game and was met with many unexpected jumps and frights along the way. Weirdly, being in the VR space felt like it slimmed down the field of view and most of the scares and twisted visuals were lost in the mix. This was both while moving and standing still in Layers Of Fear VR too. I understand that some of this was to help with any kind of motion sickness players might have while moving, but most of the quick movements and interactions in the sides and background always felt to be missed by myself until it was too late. Things like books flying off shelves could be heard, but visually were missed until they were already lying on the ground at my feet. It was a little weird to have this level of immersion broken by offering up less to see in a game that used that so well the first time it launched. I just never had those same feelings and I know it was because most of the time things happened and I never saw it.

Sometimes that was due to the limited field of view here, but it also felt like it was part of the issue with the movement controls in Layers Of Fear VR. I was using both PS Move controllers here and with the lack of a thumbstick and using the buttons to move, I felt more like a tank instead of having those free-flowing and quick movements that were possible before. Sometimes this also placed me into a corner or stuck on an item that had me more focused on trying to get free instead of looking around and what else could have been going on in the scenes. In a game like Layers Of Fear, it feels like you really need that to help drive things home. Especially given the limitations of the PSVR headset and the wires attached to it. While there was an option to use the physical movement to help guide and keep things flowing, it was an option that never seemed to work well with this setup. It just felt like a limitation of the hardware more than anything and the implementation just did not blend well together.

Lastly, it also felt like there was more of the original Layers Of Fear stripped from this version than I remember. This could have been to help things move forward in the game due to some of the hardware limits, but I still felt like I needed to search everything for little clues to the story and other elements going on. That is how the original version played and what was expected here. I spent way too much time opening drawers and closets in this with all of them opening up to nothing almost all the time. I remember this not being the case in Layers Of Fear before and finding all kinds of notes and tidbits that helped drive the story forward a bit more. If it was stripped out to make the pacing work better, then they should have barred all of this off too. Especially when we need to search for the parts of the game and puzzles to actually progress too. Until I realized this, I was spending much more time in each room trying to explore for it to be another empty one that led on to the next big set-piece. Something that also took me out of the game each time. 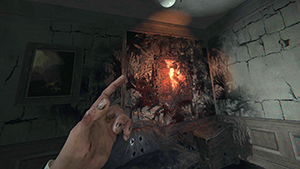 Even though things were definitely missed in this version of the game due to the above issues, when the creepy and terrifying stuff kicked in, it truly did kick in. Even when they were elements that someone playing Layers Of Fear once before could know were coming, they still managed to do the job. To say the VR immersion was completely lost would be off as it was perfectly done the few times it happened for me. These were generally the scenes from Layers Of Fear that required the player to just look around and not do anything else. These weirdly worked better than the base version as I was able to see more detail and hear more of the audio mixes that aided all of these creepy aspects. Almost like taking a trip through one of the best-crafted haunts that are able to pull off the outlandish in a magical and practical way. They were few, sure, but those few did shine insanely bright like a baby head floating in space screaming at you for no reason.

To add to this, and probably why it was not removed out of Layers Of Fear VR, there did seem like there was a bit more to the inspection of items and documents in the game than before. They were few and far between, but instead of just having the flat document, we had full tangible things to play with in the game. Sure, this is kind of one of the additions that the VR space generally lets us all have but when you can hold some of these documents and freely flip them and have the noises of the game still fire off, it adds an extra level of dread to it all. Even some of the other items along the way that are bone and flesh can be just as creepy to watch as your digital hands lift them up and move them about. It was never to a level of disgust, for me at least, but it was something that the original Layers Of Fear was not able to do just as well and there is a definite tip of the hat when it comes to all of this too. Just as it should be to other horror titles that try for the same effects along the way. 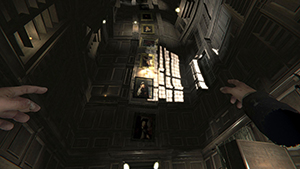 Layers Of Fear VR is definitely not the most shining example of what VR can be, but it is a decent step forward to us the space for a horror setting. Some of this is due to the limitations of the movement and ensuring that sickness was not a thing, so I will let some of that slide a bit. It was a little bit of a letdown that there felt like there was less to do in this over the base version of the game, but then I have to realize that most gamers are not going to be able to play through this kind of game without having panic attacks in one sitting. It still does retain some of that weird and mental break from before and Layers Of Fear in VR could be a bit much for some gamers. It was a fun experience but I still prefer the base version when it comes to the true frights of it all. There are some shining examples for what to do and what not to do in VR horror games that others can learn from, just they did when Bloober put this title out the first time. It is worth the price of admission to try to have non-horror experts go through it all, but I have a feeling it would still work out better with a big screen in a dark room. The novelty is there for the price but the experience needs a bit of work.

Layers Of Fear VR was developed and published by Bloober Team for the PSVR on April 29th, 2021. A PSVR copy of the game was provided by the publisher for reviewing purposes.