We sit down and review Mortal Shell: Enhanced Edition. The next-gen version of this Soulslike title. Here is our review of the Mortal Shell upgrade

The original release of Mortal Shell came and went last year to the delight of the vast community of Soulslike gamers. It also came and went with a release on the last-gen systems out there Cold Symmetry and Playstack not being able to offer up the best version of the game at the time. Now we fast forward a little bit and here we have the release of Mortal Shell: Enhanced Edition as it hits the PS5 and Xbox Series X with all of the new visual upgrades and changes that only the PC gamers have truly been able to see since its launch. Now we are here with our review of the game to let you know if it will be worth the time to upgrade or go through the hells of it all one more time.

In Mortal Shell, you awake as a foundling. A pale creature that seems to have no purpose to it all. Something that quickly changes and is shown to be false as we stumble upon fallen heroes that we can effectively possess. All so we can find out what caused the world to plunge into the insanity and darkness that we see all about. Could it be something as simple as that, or did man have different aspirations, and there needs to be some solid redemption along the way. It is time to take these mortal shells for a ride to find out just what could be the case here…

With full disclosure, I am not a huge fan of the Soulslike genre, and Mortal Shell was always going to be a hard sell for me beyond just the visuals and theme of it all. This was only made more frustrating for me when it came to the time of combat and being able to attack, harden, or parry along the way. I was hoping that I could have nailed the timing of it all a bit better with the advancements in the Mortal Shell: Enhanced Edition, but it always felt like it was off. This could have been just my fingers and brain talking, but even with the enhanced framerates I was hoping to have a little more of a timing issue to notice things. This is why it feels like some of the controls were a little skewed to me. Again, this could just be on my end but after hours of playing and retrying, it never seemed to mesh up properly.

To that end, it made the difficulty of Mortal Shell feel like it was way more fluid and various than it should have been. Sometimes the basic enemies were tougher to bring down than some of the bosses. That is if you did not take the time to go out and explore for everything right from the jump and collect all of the “shells” or characters in the game, weapons, and upgrades. Sure, that can be something players in a game like Mortal Shell might want to do to make the game easier but it took away from any kind of progression feel. That and if you used the correct shell you could run past everything and become the most effective killing machine to make the rest of the game feel like it was too easy. It just felt off to me and, again, this could be part of my bias. It just was not all that enjoyable once you figured out this was the case and other gameplay techniques that made each fight way too easy. 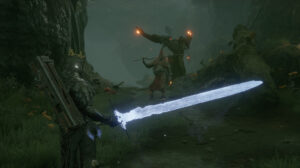 I mentioned it above and I have hopped into other titles like Mortal Shell before due to it, but the game looks and sounds amazing. More so with all of the new upgrades and what the PS5 is able to pump out there. The original version was no slouch, but in this version of it all, you could see a lot of the detail and care that could have been missed before. It is why it is always a mixed bag when you find out games are doing these kinds of upgrades due to the new hardware out there. The Mortal Shell: Enhanced Edition completely sells itself here and was the biggest part of drawing me back in. When I can have all kinds of different feelings as I crawl through a tunnel not knowing what I think I see or hear, it is a positive in my book.

While I did not have a chance to play through each of the “shells” in Mortal Shell, I do need to mention that this was something that caught my eye and needed a good light shined on it. From my experience in these kinds of games, we are only given one character and we need to learn how to work them and the various weapons along the way. Here, we are given our choice between four, technically five, and then a variety of weapons. Each feeling like it could fit the specific playstyle one might have. I know I generally hovered toward the tank character in the mix to help with all of the health I was losing, but it looked like there was an option for everyone if you wanted to focus on quick-moving, or special abilities, or an average of it all. It was something I wish I had more time to play with as it did help me get further into Mortal Shell than other games in the same vein have ever had me before. 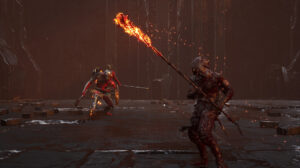 In all honesty, I will say that if you enjoyed Mortal Shell or most Soulslike games out there, this will be the version you will want to have and play. It offers up a few different elements to enjoy in the mix of it all that others do not and these new upgrades offer a better playing experience when it comes to the visuals. Sometimes it does feel like enemies are harder or easier than they should be, no matter where you are with your character progressions. Also, it is not an overly long title to get through once you have figured things out and explored a bit the first time. Thus, giving you many opportunities to experience it all in a different way quickly. The Mortal Shell: Enhanced Edition is not going to be for everyone, but should be on your radar if you are even a basic fan of the genre and style of it all.

Mortal Shell: Enhanced Edition was developed by Cold Symmetry and published by Playstack for the PS5 and Xbox Series X on March 4th, 2021. A PS5 copy of the game was provided by the publisher for reviewing purposes.