Of Bird And Cage

Music is always something that can help drive games out there, and here we go with Of Bird And Cage that is looking to do so in a way that we do not normally see out there. Not in the way of a rhythm game out there but with Capricia Productions giving us all a musical in the form of a video game. All while giving a new take on the Beauty & The Beast tale out there and giving us all a new way to enjoy some amazing artists in the mix. It might sound a bit off, but that is why we are here with our review for Of Bird And Cage to let you know if it pays off and works as was expected. All of which is something that can be hard to tell from just the gameplay trailers and teases alone for now. Let us put that CD in and let the music flow a bit for you…

Gitta has had a rough go of things in life but that does not stop her dreams of making it big as a singer. She has a dead-end job, a horrible family life, and has also been addicted to a new designer drug that causes her sanity to flee when she is off it and stressed out. This leads her to all kinds of other dark paths in life where she is kidnapped and forced to do some questionable things along the way. Some of which to help keep her sanity but others to try to get herself out of these poor situations. All while trying to figure out who she can trust and forgive along the way. 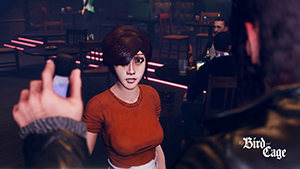 It might not be easily seen in the trailers for Of Bird And Cage, but one of the core bits of this game is that there are many QTE and contextual button prompts to go through to progress it all. It might not be everyone’s style of gameplay to enjoy, but it has its place out there and is something needed to keep this from being just a rhythm game. Sadly, this is where the game falters a bit as there is no consistency to how they come up or even link to the in-game visuals. They are just there to give us something to do in the scenes besides watching things play out, it feels. When pushing a door open or trying to shove something one would think you would do button/key presses or hold down the correct buttons/keys to do so. This did happen in Of Bird And Cage at times, but given that each option felt random, they were far and few between. All of which leads to many lost scenes or failed actions along the way. So, be ready for a bit of frustration in these aspects.

To go along with that in Of Bird And Cage, each little segment where we are given some level of freedom, is an interesting mechanic that allows the scene to play out as long as the song or musical segment is playing. Once the album starts to play, it does not stop and this helps drive the action forward. It is a great concept to have but in many instances was a bit of a setback with the limitation of direction in the game on what we need to do. Some of this due to poor prompts or explanation in the game but also to a bit of a lack of HUD to go on. Sure, this can lead to a game that does not “hold hands” that can be a fun mechanic but in Of Bird And Cage, there were whole segments where I was just running in circles trying to figure out what to do without finding a single thing. Then the scene moves forward with some saying “Failed” and others saying “Won” no matter the case. Just a little more direction could have helped with this and I would not have had to list this in the Hated section.

None of this was helped by some of the loosest controls I have felt in a game in a while. Let me be more distinct. Certain sections had these issues in Of Bird And Cage and not the whole title. Specifically scenes where we have to drive or catch things falling out of the air. It did bleed over into a few other portions where it was needed to hold down a button/key to keep a grasp on an item and them move about too. Thankfully, these are only a few smaller sections in the game but none of them truly felt like they lined up and could cause for a lot of frantic movement and rushing to detract from the rest of the experience. This is all something that can be patched out of Of Bird And Cage over time, but during my play, it was something that stood out and had me restarting sections for failing events or even scenes due to trying to slowly nudge items around to get them into place. 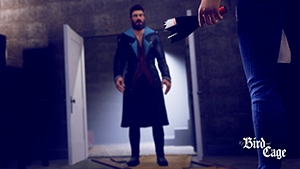 Without a doubt, Of Bird And Cage does exactly what it sets out to do when it comes to the music and being a form of playable album or music video. It seems odd to say, but this is a playable musical that offers up not only some great scenes to experience but also times the music so perfectly with the events. This is beyond using it to help with the flow from scene to see as a form of timer. I was completely sold with a chase scene that starts out soft and melodic but turns into a heavier and thrashing metal track while everything in the scene hits with the beats and rifts. Add in the fact that the character models actually move and sing along with the tracks in Of Bird And Cage to give us all even more of a subtle way to have the story unfold. The first time you notice it in the game it shines out there and then just further enhances everything along the way to tell a deeper story.

Speaking of, the story in Of Bird And Cage is greatly paraphrased and basic above as it is another shining thing in the game. I really do not want to spoil it at all as it is another interesting take on the Beauty & The Beast story and not in a way that is heavy-handed at all. It does go into some darker and potentially triggering aspects for some out there, but it feels like they are offering up a better version of it all for a modern age. It also highlights a lot of the negative sides of the story that gets glossed over along the way while still trying to keep true to it all. Not to mention that it does help with the lyrics and musical writing that accompanies the whole of Of Bird And Cage. I wish I could say more on it, but I do not want to spoil a single element of this wonderful story that is being told here.

I will drop back in on the music for Of Bird And Cage, as it is written for this title, and all of the artists that helped do this put together a solid musical album in general. I mentioned before about needing to replay scenes due to not knowing what to do or failing when I should not have. The biggest boon to that is the fact that you are able to hear these amazing tracks play out once again and get a deeper feeling for how it all links together in all of the forms here. Hells, Of Bird And Cage even offers multiple outcomes and endings to the story here to have you back in to experience the album and see things through new lights. Sure, other games do this too, but this is the first in a while where it felt like I wanted to do it for the experience and not because I was trying to be a completionist of a video game. It was like playing your favorite album on repeat just to hear all of the little and subtle things the artist may have had in there, only this offered up a video game to complement it all. 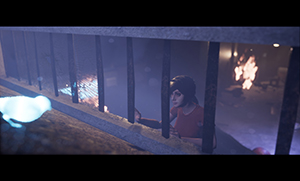 If you are going into Of Bird And Cage looking for the best gameplay experience out there, you are going to be let down by the game as those elements were still very rough around the edges and frustrating to deal with. There is no denying that. If you are going in for a full multimedia experience and play through an engaging story and see what a video game musical can be, then Of Bird And Cage is going to blow your mind on things. That is the true selling and shining point of this title. The music is amazing, the scenes where it cuts into the characters just singing are fun, and I actively wanted to replay things just to hear it all again or see how it better fits into the narrative and world. I would say give it a chance and a play at the very least, as it might be something you never knew you wanted just staring you in the face.

Of Bird And Cage — Launch Trailer

Of Bird And Cage was developed by Capricia Productions and published by All In! Games for the PC on May 20th, 2021. A PC copy of the game was provided by the publisher for reviewing purposes.