We sit down and review Paradise Lost. A dark walk through a twisted alternate history setting. Here is our review of Paradise Lost

Playing with history can be fun and can lead to some interesting ideas on how things could have played out differently based on how events transpired. That is part of the core to Paradise Lost, among other things, that PolyAmorous wanted to dive into. They are not the first to do this, obviously, but it is the latest to let us go in and see a different view of things through the eyes of a child. All as we walk around the WWII-inspired setting that is set well after the wars went down. Here we go diving into our review for Paradise Lost as we take a long walkabout this bunker to see just what twisted things and the world could have been if things progressed just a bit different out there.

It is the 1980s and Szymon is out there surviving in a post-apocalyptic world where Nukes were dropped everywhere and everyone has been killed off. All of which sparked by the universally hated Nazis and would you not know it, but Szymon has found one of their secret bunkers while out and about on his own. Well, out and about looking for what happened to his parents and trying to survive. It is a good thing that there is a friendly voice coming over the P.A. systems to help guide us on this quest and open some doors along the way. We need those answers and they have to be in here somewhere… 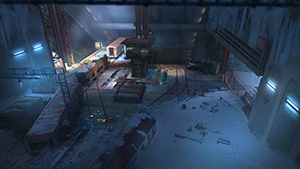 The basic controls for Paradise Lost are pretty much that of an FPS title out there if you removed any form of shooting. Something that seems like would be an easy thing to dive into, but the rub comes in with some extra mechanics that made no sense to me or anyone other than developers. Instead of just pressing a single button to interact with an object, you have to do that, hold down the right trigger, and then guide the movement stick towards what direction you need things to move. You have to take three steps to open a door in so many instances or to pull a lever. All of which would be fine to have added into a game like Paradise Lost, except for the fact that none of it had any bearing on the gameplay besides slowing you down for the rest of the game. The controls even imply that there is a reason to slowly open doors here, but spoiler alert, there are no reasons for this at all besides pacing.

Speaking of pacing, get ready for a very, very slow burn for the game as Paradise Lost does very little to keep things rolling to keep you engaged. Our character cannot seem to move faster than a slow walk and any kind of obstacles or puzzles found along the way just feel like they are there to slow us down instead of adding any gameplay value to things. All of which feels like it was just placed in to force the story beats to go as they do in Paradise Lost but not truly keep our attention as we wait for the next bit of exposition or events to transpire along the way of it all. Even some of the above-mentioned control issues were never well-defined that you can miss the fact of other buttons to push unless you sit there in frustration and accidentally shift the character’s fingers over to a different option. Something I luckily did early in the game during a section where there was no progressing unless you found this out on your own. 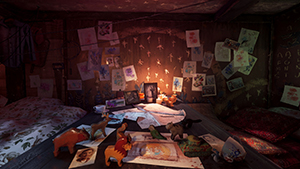 While the gameplay and pacing of Paradise Lost were horribly lacking for me, I will say that the story and setting of it all was rather interesting and captivating. I am not going to spoil any of that, but it is what truly kept me trying to make my way through and see how Szymon moves through the stages of loss and grief among other things. It was almost as if the team had this amazing story to tell and placed it in an alternate timeline, but were then forced to slap gameplay around it instead. Gameplay that could kind of step in for the different stages humans go through but was better highlighted in the inner and external monologues that we have to enjoy. Mixed in that it is also a younger human going through it and you can get some interesting scenes and ideas flowing right along with it.

In addition to that, the setting and environments in Paradise Lost, as I slightly mentioned, felt like they were thought out well and linked into the grander narrative of it all. Not only that but made sense in the way of the story and timeline we were on in it all. It felt like there was thought and a whole lot of time placed into it with some huge set pieces and scenes to look at. All to make you want to dive further into the world that was here if you could. I mention this here, as the gameplay only slightly touches it all but it is done well enough that you understand it well and want to know more. I know I would love to be able to walk around everything out there in Paradise Lost to see all of the little detail bits mixed in to help craft a world we barely get to explore when the gameplay is flowing. 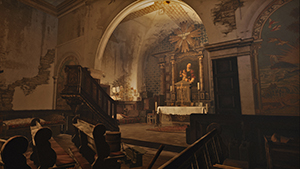 At the end of it all, Paradise Lost is a walking simulator with some really rough control and gameplay elements to enjoy. It felt like there was a larger title in the works but the gameplay had to be scrapped along the way with only the great story getting left behind. Which, of course, is the shining light here for Paradise Lost. Even if it does feel like some story beats could be called out along the way, it was an interesting take on an alternate timeline as well as focusing on how one can cope with grief and trauma. It might take you to some dark places but if done correctly bring you back into the light without dragging you down into the hells below. Sadly, my recommendation is to just watch for the story as the gameplay will most likely make you want to skip all of the good things it has to offer up.

I give Paradise Lost 4 Data Tubes on the Data Tube scale.

Paradise Lost was developed by PolyAmorous and published by All In! Games for the PS4, Xbox One, and PC on March 24th, 2021. A PS4 copy of the game was provided by the publisher for reviewing purposes.