We sit down and review Postal 4: No Regerts. The Postal Guy is back in action & out of Early Access. Here is our review of Postal 4

It does feel like it has been some time since we had a full Postal game release out there. Sure, Running With Scissors has given us a few bits of DLC, some remasters, and Early Access to the game before now, but it has been about eleven years since we had a full and new title in the IP hit the PC. This is where Postal 4: No Regerts comes in, as it is fully out there and ready for everyone to give it a go. It has wrapped up a lengthy EA phase and the official build of it is out there for download and play as you read this. But is it going to be worth the time and money for you? That is where we come in with our review of the official build of the game and where it stands, not that the devs feel it is ready for the masses.

Things are not going so well for our Postal Guy once again and he is further down on his luck. Life has hit him hard and even took away his only home as well as companions. Not that many would want to normally hang around this crass loser in the first place. Nonetheless, he has set out to reclaim what he has lost and is ready to take on the odd job while causing all forms of chaos in the streets. Maybe he will come out on top or maybe he will find himself sleeping in dog piss in an alley again. It is up to us to help him through this journey. Maybe shoot some random humans along the way too. 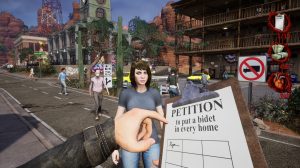 When it comes to games like Postal 4: No Regerts, one does not expect the most intelligent of AI for the NPCs and world out there. It is a silly thing where hyperviolence is the norm, so we are not expecting chess masters out there. Sadly, when it comes to this in the game, everyone is set to the lowest mode of intelligence possible out there. Even to the point where enemies will not know how to walk around an open fence two inches to their left or will run straight into a wall to attack you and never move to recalibrate once you strike back. Many times it is laughable in Postal 4 and makes the game lose any form of a challenge out there. There is no reason I should be able to walk through a prison riot where everyone wants me dead and watch all of the bots punching or shooting walls. To that extent, get swarmed by animals that can be funneled down one path to make it an easy killing spree. This made the game lack any kind of threat along the way and is in desperate need of an upgrade to it all.

Speaking of, Postal 4 also seems to be plagued by those dreaded world-loading hiccups out there still. Hiccups that even a low-end PC should be able to ignore, but even with a fairly decent gaming rig here, moving about the map would force the game to pause and load in a new section even though it was not something heavily populated or requiring the highest amount of processing power to display. You can see some of it in the gameplay capture below, but simply walking into a new location could cause a minute or two worth of delay for the game to actually catch up. Not something that helps with the flow of the game and causes bigger issues later on in the game when in firefights and need to have things running as smooth as possible. I even tried replaying a few of those sections to see if it was my system and not how Postal 4 was running, but sadly, it appears to be the game and not just the hardware it is running on.

Lastly, and maybe this is more on me and my past experiences with the Postal IP, but the game does feel like it takes too long to get us to what it has been all about before. Not in the way of the over-the-top weirdness and crude humor, but in the way of doing more than just running a few errands and minigames along the way. You can have a look at almost fifty minutes of gameplay I had below that leads into the second chapter of the game, and it all boils down to collection quests and minor combat segments. Not exactly what we should expect from a Postal title or the trailers up to now. Maybe this is how I went about playing the game as I could have just gone crazy killing everything if I wanted to, but it barely feels like that was the case here. Almost like I could have gone through the whole game if I wanted to without going crazy and killing everything out there. 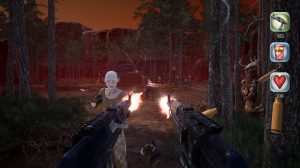 Even though I touched on it before, I do have to say that if you have played any of the past titles in the line before, Postal 4: No Regerts is going to hit all of that crude humor and insanity that the IP has been known for. Right from the start of the game, you are thrust right in and then get the rest of it hitting you at the right time that it is needed. That could be a bit off for those that are not into that humor, sure, but the Postal IP has been around for quite some time and is something that many should know before going in. Not just in the way of Sex and Poop jokes, but also quite a bit of dark humor. This is all right up my alley and pulled me right into the game to help ignore the hiccups and drawbacks mentioned before. Everything down to even the item descriptions in the game here. You have to love when the game plays fun that bad pizza somehow heals us in the video game setting.

While it is not something that one would normally expect in a Postal title, there was weirdly some fun platforming mixed in to help us all solve some puzzles. They can get a bit frustrating at some times, but even when it has us all running the risk of drowning in a pool of human excrement, it brings some of the fun back without the need of having to go gun crazy in the mix. Especially since it feels like these kinds of gameplay elements feel like they have multiple ways to solve along the way. I know I found all of this in Postal 4 and it had me wanting to do better each time I would fall or fail. I do wish there were a bit more, but I have a feeling that would have stretched Running With Scissors a bit thin and made each one feel a bit lackluster in the final build if we had too many pushed down on us all. This could just be something I have been looking for in the game and might not be for all. I fully understand that. 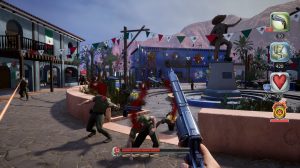 So, when all is said and done for Postal 4: No Regerts, it is a bit hard to recommend this for everyone out there with the game in its current state. The version I had a chance to play still feels like it is in an Early Access stage of things out there. That is not to say that the game has not made leaps and bounds since it was first placed out there back in 2019, but for many gamers out there it is going to upset you. The game does an amazing job with the humor and insanity that the Postal titles have been known for sure. That is not going to be something that everyone is going to love and enjoy. So unless you have an odd sense of humor and love the crude and dark humor out there, you might want to leave this one to the side for now. Maybe if the gameplay and mechanics are refined a bit more then it could be worth it for all, but that is something we will have to wait and see flow out after the current 1.0 version you can pick up right now.

Postal 4: No Regerts was developed and published by Running With Scissors for the PC on April 20th, 2022. A PC copy of the game was provided by the publisher for reviewing purposes.