We sit down and review Ragnaröck. A new VR Rhythm game for those virtual Vikings out there. Here is our review of Ragnaröck

The day is finally here and Ragnaröck is upon us all. Not in the way of the end of times, I know this joke gets old, but in the way of the latest Rhythm VR title that is out there from WanadevStudio for the PC platforms out there. Yes, that version of it all where we will be smashing some runes out there to get all of our Vikings rowing the longboats just a bit faster. Yes, technically, Ragnaröck is a Rhythm and a Racing game out there as one feeds into the other. An interesting take on it all, but does it truly work out as planned? Grab your oars and get ready to paddle along as we dive into our review on how the game does out there. Specifically on the Oculus Rift for those looking to get in on a specific headset for it all.

There is not much in the way of a story here, but if we had to go down that path… We are in charge of a Viking crew and we have heard about some glorious purpose and plunder to be had out there. We gather up our best rowers and set sail to head off into lands unknown. Would you not believe it, but others have figured out the same thing too and have set forth on a similar journey. It is now up to us to pound the drums and rally the crew to sail the fastest that we can to the beat of some amazing music in the mix out there. The gods must be please. 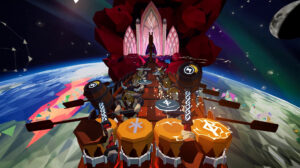 It may sound weird, but during my experience with Ragnaröck, I found that I was more or less on my own to figure out everything in the game here. For a title that seems like it should be fairly straightforward, it was a little off-putting from the start to not have the greatest of descriptors for things or even a tutorial mode to experience. Granted, the good old trial and error method to the game does lead to learning it all rather quickly, but for the first few songs, getting the timing and knowing what the shields on the boat do will allude you. For the sake of ease here, it seems like the shields give us a bit of a boost in the game after being charged up with godly power and waiting for the runes to be fully over the drums scores you a faster row. It just would have been nice for Ragnaröck to open up with all of that with a basic song so one could get their barrings and set forth with a bit more ease. More of a nitpick, sure, but it was a bit of a mark against the game.

Also, and this feels like it is something that will be in every VR Rhythm game out there, Ragnaröck does an amazing job with some of the visuals and background of the game. Even little things like the style and animations of the crew and ships themselves. It is just almost impossible to be able to take them all in and experience it all with splendor. That is, the notes and actions in the game will have you so focused on hitting the flying runes that you will miss out on everything else going on out there. Almost as if it was all designed for someone else to watch someone play Ragnaröck and the player to only focus on the musical beat and hitting things. That is the core of the game, but given the work they did and trying to keep an eye on the other players in the race or your ghost ship can lead you to miss things one way or another. Not a huge issue but something to be aware of out the gate to keep you focused a bit more. 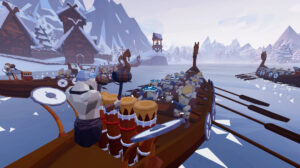 Once you get into the motions of Ragnaröck and figure out the minutia of it all, by the gods does the music and everything sync up insanely well. Better than quite a few other Rhythm games out there. So well that it was a fairly easy progression to jump to the harder difficulties for the songs and still feel like you are doing a decent job with it all. It is all virtual drumming at the end of the day, but it does seem like Ragnaröck nails the fun aspect of it more than trying to go with any form of realism we have in other titles like it. This should be seen as a great plus for those that have always been intimidated by games like this or ones that focus only on the drums. You can let your inner Animal loose and still make it to the end of the race each time. How well will depend on how much effort you are willing to put in, but the fact that it focuses on the fun over the realism is a huge selling point for it all here.

While Ragnaröck does not have the most robust soundtrack as other games out there, the team did an amazing job of selecting titles that not only fit the style but also flowed very well into the gameplay. I actually did not think that there were this many Celtic metal bands out there and also thought many of them would sound close to the same with each play. I could not have been more wrong about this and enjoyed playing each of them for hours on end. Yes, even after all of that time, they always felt fresh, fun, and never any kind of repetitive as we have seen with other games. Given that Ragnaröck also has a way to build custom songs for the game too, I can see it getting expanded further than the 30 or so tracks we do have but even with the limit here, it always felt fresh and fun. Even to the point I forgot that my arms were in pain from smashing down these virtual hammers constantly. 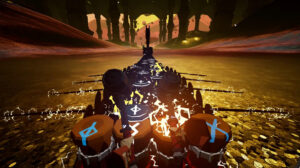 There is still some work that needs to be done to get Ragnaröck fully up to a perfect game, sure, but that does not mean that it is not a whole lot of fun out of the box right now. Especially when you look at the fact that the only real issues came down to nitpicks on specific gaming habits and desires. I legit lost hours of my time playing through all of the songs multiple times and will be doing it again as soon as I can. That is what truly matters here. Ragnaröck works and is an amazing take on a tried and true genre of games out there. You would be doing yourself a disservice, as well as Odin, if you did not jump in and give the game a try. It is another one of the titles that fits perfectly into the VR space and we need more and more like it to keep it all going.

Ragnaröck was developed and published by WanadevStudio for the PC and VR on July 15th, 2021. A PC copy of the game was provided by the publisher for reviewing purposes.