We have had a lot of updates and news for Tape: Unveil The Memories up to now and we have been curious to see how this title was going to play out there. This is the latest title that BlackChiliGoat Studio wrapped up for us on the PS4, PS5, and PC with some new twists to the horror walking sims out there. Most of which needed to work with a camcorder that allows us to play with time and other objects out there. Not the usual thing you would expect to see out of the indie studios out there. that is why I was glad to give Tape: Unveil The Memories a solid play through and see how it all holds up. Here is our review of the game and if it is going to be worth your time and money out there.

Iria, our protagonist, is living a life that seems to be just the norm that we could expect. That is until a mysterious VHS tape shows up with a message from Iria’s father asking for help. Help that will require Iria to relive memories and dive down the darker secrets of the family. Secrets that seem to be tied to the horror films Iria’s father helped craft out there. It is time to figure out all of the hidden truths and figure out how this new mysterious camera works in a weird new world. 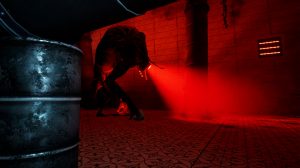 To start things off, and like many of these issues it could be something lost in the Spanish to English translation on my end, I have to start off with the fact that the gameplay mechanics are not well presented for us to use for Tape: Unveil The Memories. I am talking beyond the basics of moving about the world and interacting with elements. Specifically, the core rewind and fast-forward mechanics in the game here. The first time it comes up, you are presented with some of the glitching elements that can be manipulated, but there is no indication beyond what buttons need to be pushed. In Tape, this is how you will solve most puzzles but it is not clear how we need to move objects as well as store up the energies within. Once it is figured out, the game flows smoothly, but during those opening moments, it can lead to many wanting to set the game down and walk away.

Next up, it has to come down to the various other objects in the world that we can interact with beyond the VHS tape or key items. Many titles like this seem to cram so many things in the game to touch and move, that have no need whatsoever. Is it to pad the gameplay loops or to give us a reason to use the “inspection” button? That is how it always feels and, sadly, Tape: Unveil The Memories falls prey to this as well. They are never anything that cannot be ignored, but when you need to search for keys to open the next door in the world, they can be distracting and lead to a loss of immersion. This even was included in the addition of magazines and other pictures in the game. Some of them felt like they would link into something deeper, but ended up being seconds of time to watch an animation and get maybe a single word of text to lead into anything else.

Lastly, and this could be something on my end too, is the creatures and enemies in the game that we have to face. They all seemed a little on the dull side when it came to AI. Specifically, to that end. You can see some of it down in the following gameplay video, but they never really felt like they were as imposing or difficult to bypass as the game made them seem. Seeing as they were about half of the other challenge to the game, it certainly felt like they should have had more difficulty than running fast away or walking slowly and quietly around them. Again, this could be on my play style and could have been something different for others but for my play of Tape, they never felt like a true challenge. Maybe they just needed a little more pep to their step.

While Tape: Unveil The Memories is a bit rough to start, as mentioned, once it gets going, it never feels like it loses its pace. This goes just as well for the story as it does for the mechanics that are presented along the way. All of this leads to the puzzles that require you to manipulate specific objects in the world to figure out how to press on and/or open more locations in the game. Some of them are a little on the basic side, sure, but there are also a few more puzzles mixed in that will excite you more that you keep pressing on with Tape: UtM. One of which was a fun and new way linked into a boss area of sorts that I had more fun figuring out than I have in the past with other titles like this one. All of this proves more that studios like BlackChiliGoat need to be given the chance to press the industry forward.

In addition to that, the team also did a great job of creature and world building for Tape too. Even with the core of the game being in a language I am not fluent in; I was still able to be pulled in and understand what the team was going for just on the visuals of it all. I will not state what the creatures are here, so you can figure that out for yourself, but even the massive Black creatures feel about right in the setting. Not to mention all of the classic and older elements that dive into the classic horror film tropes/settings that the protagonist’s father is all about. There was always a classic VHS tape feel if not classic cinema feel even when roaming the halls of a hospital. Something that I may not be representing correctly by words alone here for everyone reading still.

To round it all out here for my experience with Tape: Unveil The Memories, I will have to say it was also a fun time when it came to the overall story of the game. Not just in the basic dialog, text found on items, and the exposition dumps from watching the various tapes found left by Iria’s father, but even when things started to get a little more meta out there. While not required, even the trophies/achievements have little nuggets left in there for us to take in too. Given that the game feels like it is a take on this style of storytelling out there, it is not only fitting but fun for those looking for all of that glorious lore out there. Sure, it can be spoiled a bit if you just go looking, but getting to experience it live the first time is always a fun thing. This could all be on me though…

I know I enjoyed the time I had with Tape: Unveil The Memories here, but do need to note that it is not going to be a title for every gamer out there. If you are not interested in figuring out some basic controls on your own and crave something with a soulslike challenge, you might want to give Tape: UtM a pass. It will get the blood flowing for those looking for a fun story, time manipulation mechanics that lead to puzzle-solving, and a bit of horror mixed in. It is not one of the dime a dozen titles in the genre that is filled with them, that is for sure. I will recommend it to those that have that interest and get a bit of fun out of the following gameplay I was able to capture during my time with the game. Not to mention to help keep studios like this pushing things forward for the bigger studios to try to mimic.

Tape: Unveil The Memories was developed and published by BlackChiliGoat Studio for the PS4, PS5, and PC on April 13th, 2022. A PlayStation copy of the game was provided by the publisher for reviewing purposes.