We sit down and review Tiny Tina’s Wonderlands. A trip back into the fantasy lands of the Borderlands. Here is our review of Wonderlands

Sometimes DLC falls flat and sometimes DLC takes off and becomes its own thing, which is the case we have here for Tiny Tina’s Wonderlands. Not that we are seeing Gearbox slap on some DLC from past titles, but taking an idea that so many loved and giving us all a full game instead of a small segment to it all. All of which would be a gross simplification of what Wonderlands actually is, but someone needed a good intro here, Bay Bay!. Now we can dive in to see just how well this all translated over and if it is worth your time and money to spin up a game of Bunkers & Badasses. Sit back and enjoy our review.

Sometime in the Borderlands we all need to take a break from shooting and looting all of the gear out there. That is where Tiny Tina comes in and offers up a chance for us all to go through a different kind of campaign in a fantasy setting of it all. The only thing is, we are a noob to it all and the seasoned veterans could walk right through the campaign with no issues. Now they get to kick back and watch as we take on the role of the Fatemaker and head out in the Wonderlands to bring down the Dragon Lord and save everyone in the process. What could go wrong, besides the villain becoming just as meta as our Bunker Master… 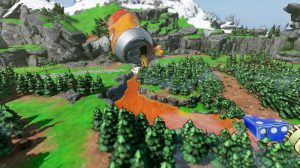 Just as the world Tiny Tina’s Wonderlands is set in, the game is a looter shooter at its core. We run around shooting everything and looting all of the corpses and boxes along the way to find better gear so we can do it all again… but better. It seems like it would be a solid loop to have, but for me, things fell a bit flat. All I ever found was that I was trashing everything I picked up in the world and only ever keeping the gear I acquired through missions or the story. It is a problem I usually have in the core IP, but for some reason, in Wonderlands it felt glaring. In fact, I spent a good chunk of levels ten to twenty-five using the same weapons, gear, and magic never finding anything that drastically improved or changed a thing. I am talking even in terms of stats too. It would feel like this would be a great title to further embrace this system but instead, it felt more like something to only trigger the lizard brain to never leave anything behind.

Linking into all of this for Wonderlands, we had the new-ish mechanic of magic added into the game. More or less, this was to replace throwable items from the parent IP to better fit the fantasy setting. It felt like a great idea to go with, and in general worked very well, only it never felt like there was a great variety to have. Out the gate, I started with a few of the traditional fireball or lightning strikes but once the world opened up, I fell back on a meteor strike and then homing ice shots. The reason is due to the fact that they worked insanely well, could kill enemies in a single hit, and I never found anything better. Wonderlands felt like it had a good chance to play with all of this, but then never gave any incentive to change things up. Even when you have enemies that are immune to the elemental aspect of the magic, it would still handle minions or trigger environmental attacks that would balance it back out. It felt like an amazing idea, but poorly implemented by adding it into the loot system.

Then, lastly, we have how repetitive things became and how quickly that happened in Wonderlands. One could argue that any shooter title can fall into this, but when you have great missions in the game that feel like they are advancing the plot only to be forced to go into an area shooter mini-game, it ruins the momentum that was already going. Sure, most of these are optional, but many times you are continuing a plotline that has us going to a new location to fight a massive boss. Along the way, we have something blocking the path with the only way to pass it is to go through multiple waves of enemies to open a chest that has the item inside. Why not make that a whole quest and keep us further engaged in the Wonderlands instead of just forcing us to play something that was already listed as end-game content? This goes into the random encounters that can fire off in the overworld. The only redemption there is that we do get the option to slap the encounter and say “No! Bad encounter. Go to your room and think about what you did.” 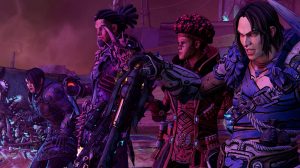 One thing that we all know Gearbox for when it comes to their titles is mixing in fun little bits of humor and playing on some of the tropes we get with their settings. Wonderlands has that in spades and most tabletop or fantasy players out there will find all kinds of fun with that. Even those that love the over-the-top nature of the IP this is all coming from will be able to find fun and engagement in it even if fantasy is not their normal go-to. Even with Wonderlands being set in a wasteland setting of sorts too. Most cannot say they have not been to a table game where a player or DM drops food on the map and then somehow works it into the core of the game too. It may seem like a fast and quick joke to have, but it is these little meta moments that make this game and the others it is based on a memorable event to have. Some will think they drag on for too long, as you cannot please everyone, but for me, it helped bring me back in and ignore some of the negative bits that I mentioned above.

Another fun thing that Tiny Tina’s Wonderlands tries to lean into is, obviously, the fantasy setting of it all. It could have been a quick thing to state that it is just a Borderlands title with new skins slapped on. Sure, you can find “magic” weapons in the game that function just as a machine gun or shotgun would in the other titles, but there are legit Medieval weapons to be used too. All of the traditional melee weapons come to mind, but then you have the crossbows added in too. A weapon that is slow and sluggish to use, but generally offers up the most damage for those that want to go down that path of play. It is another of the personal choices you will have to make in Wonderlands to make it a truly new title for you. Although, you can always just default back to having the fantasy-skinned Borderlands if you so choose. They do have a game formula that is not broken there and this one does not try to fix anything. It just adds more options for the player to go with.

Lastly, and building on the idea of choice in Wonderlands, this title does offer up some fun new ways to combine multiple gameplay elements together. Not only do we have multiple classes to choose from at the start, but we have ways of combining multiple together to truly give us a play experience we want. It is another trope of the tabletop mixed in, but the multiclass system worked very well for me. Out the gate I went with the Stabomancer, a class that does focus a bit more on the melee of it all, only to find myself later on leaning into using the spells as often as I could. Once given the chance to, I blended the Spellshot class into the mix and that is when it felt like I had my perfect character in Wonderlands. This level of variety helped sell me more and added in even more play value to my game. I hope it is a lesson they take and use in their future titles too. 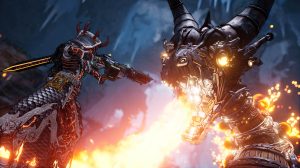 Out the gate, if you are even a passive fan of Borderlands, you are going to enjoy Tiny Tina’s Wonderlands. Will it be a game for everyone? I do not think so but what it does well from the past games it mostly feels like it improves on. The loot system is a bit to be desired here and needs to actually offer up some kind of true reward for engaging, but the rest of the game works very well. I think that this one little bit could have had me overlook the issues with the Magic system and the Waves I was normally pushed into. All of which could be fixed down the line for Wonderlands, but was a bit of a miss for me. Nonetheless, I will say I had a great time playing the game and think many others out there will enjoy at least playing it once. Twice if you want to give it a go with some friends too. I would recommend it even if you want to look at the surface of it being a fantasy Borderlands skin.

I give Tiny Tina’s Wonderlands 12 Lucky Dice on the Lucky Dice scale.

Tiny Tina’s Wonderlands was developed by Gearbox and published by 2K for the PS4, PS5, Xbox One, Xbox Series X, and PC on March 25th, 2022. A PS5 copy of the game was provided by the publisher for reviewing purposes.