South Park: The Fractured But Whole

The next big DLC for South Park: The Fractured But Whole has dropped and it adds some new challenges throughout the town of South Park

If you were not paying attention to South Park: The Fractured But Whole since its launch then you may have missed the fact that the latest DLC for the game has been released into the wilds for us all to partake in. It seems odd that Ubisoft did not have some big build up for the release as they always seem to do, but this is how it is and we can now pick up the Danger Deck DLC on the PS4, Xbox One, and PC. Now with more reasons to return to South Park and keep playing the game you may or may not have beaten already. Even though this is not the big story DLC we know is coming, but it sounds like a nice bit of challenges to have in the game nonetheless.

As the name infers, Danger Deck will play a lot like the Danger Room of X-Men lore as we will be fighting enemies in a new location in South Park and taking on specially crafted challenges in the game. All kinds of enemies will be there for the fighting and all to get some new items, costumes, and other things we can use if we choose to play South Park: The Fractured But Whole for another round. Also in the upcoming story DLC if I am not mistaken. I guess we will see here soon and also next year after the wait for the rest of the Season Pass releases for us all. Time will only tell from here. 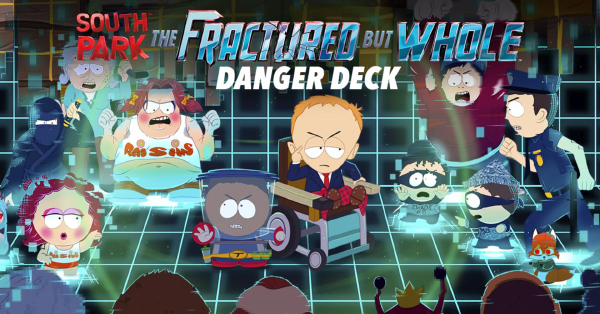 The challenging Danger Deck will teleport you to never-before-seen locations throughout South Park to engage in enemy encounters custom-crafted by the Freedom Pals. These increasingly difficult encounters will test the limits of any superhero. The combat will incorporate a variety of enemies from the game, such as the King Crab, Coked-Out Cops, Rebecca the Raisins Girl and Aunt Sheila. You’ll be rewarded with items and costumes that are also usable on alternate playthroughs of the game.

In addition to Danger Deck, the South Park: The Fractured But Whole season pass will include the forthcoming add-on content From Dusk Till Casa Bonita, a new story where players team up with The Coon and Mysterion to defeat a demonic presence at Casa Bonita, as well as Bring the Crunch, which will introduce a new story and an all-new superhero class.

If you are looking to pick up this DLC for South Park: The Fractured But Whole, you can do so for $5.99 USD. If you are a season pass holder then you just need to hop online and start the download to bring it all together and start the extra fights. You can also ignore all of this and go back to all of the other games you have out there, but it does look like we have more South Park here and it does need to get played. It is your money though, so you can be the final judge on all of that here.

Are you ready to play the Danger Deck for South Park: The Fractured But Whole here? Are you as surprised as I am to see that there was not a huge deal about its release and it mostly flew under the wire? Are you more excited for the story DLC that is still to come and this will be but a small distraction until then? Let everyone out there know what you are thinking and then discuss. When we get more for South Park: The Fractured But Whole, we will have it up here on the site. Keep checking back in here to make sure you get to see it all.