Basement Crawl, A PS4 Launch Window Title, Gets A Teaser Trailer And It Is Damn Creepy

I first heard about Basement Crawl earlier this week but that was it, I heard there was new horror title called Basement Crawl and that was it. I kind of let it fade into the background as there were many other things I had to focus on this week. Now I see that was a huge mistake as after seeing the following teaser trailer and character concepts I have high hopes for the PS4 exclusive. Let’s face it too; the PS4 needs another exclusive title that looks amazing since Watch Dogs has been delayed.

So with that, what is Basement Crawl all about? I am still not sure outside of it is being touted as a macabre maze-based multiplayer action title due out during the first days of the PS4 launch. That is truly it without making things up as I go from the characters shown or heard in the trailer below. That does mean of course that I am going to try and make up my own madness to these sparse details. So here we go. Please remember this is pure speculation with no basis in truth… yet.

What we have here is a granny and her grand baby who have fallen on hard times. Due to this, they are forced to live in the basement from Cirque Du Freak. Of course they know this from the beginning, that is the twist, and they become the horror that haunts the horrors during their Basement Crawls. You take on the role of the Creepy Clown, Child Riding Bear, Blind Fat Chick, or Artist Mannequin in a free for all to hunt down these two denizens of the deep basement. Whoever gets to the dead lady with the key first gets to lock granny and her shadow child away forever and be the hero of the creeps.

Not a bad speculation if I do say so. Of course I say so, I wrote it. Anyways, I am sure we will get more in the coming weeks, the PR email said so. That and Basement Crawl is slated to land sometime around the PS4 launch which is only a few weeks out now. I know I am interested in seeing what is all involved here. Hopefully it will be like Naughty Bear, only successful. 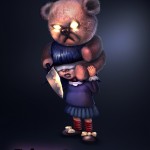 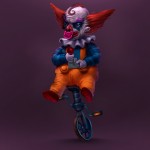