At the beginning of the month we had a nice showing of Blodborne and its slated release date in Japan during Sony’s pre-TGS press event. This was nice and all for all of those who lived in Japan but the rest of the world was wondering when Blodborne would be hitting their PS4s and if it would be around the same time. I know I speculated on the same thing at the time of the press event so I know what everyone was talking about.

Well it looks like all of the speculation was pretty much correct as we will be seeing Blodborne on February 6th 2015. That would be literally the day after the Japanese get their hands on the game although given sleep habits it could be closer to two days but now we are splitting hairs and we’ll leave that to the game’s hero.

To go along with the release date announcement there was also the announcement that Blodborne will be getting a collector’s edition too. Not a huge surprise as this seems to be what sells most games now but at least this one will run only about $10 more than the standard version of the game. For that added price you will be getting Blodborne in a SteelBook case, an art book, and the soundtrack for the game. All the vanilla stuff that we should have expected. 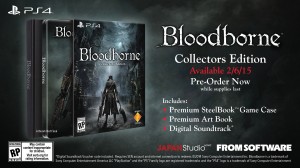 Also, what kind of announcement would this be if there wasn’t something new and pretty to look at for Blodborne right? Well we have the latest trailer from the Tokyo Game Show to show off as well as a few new screen shots to see how pretty Blodborne is going to look. I do wish that the gameplay that I have seen live ran as fluid as it does in these trailers for the game but all I’ve seen up to now has been the sluggish and slow attacks. This is more or less the part of Blodborne that has yet to impress as I haven’t seen it live yet. It is good to see that there is that form of mechanics in the game though.

Enjoy all these nice visuals of Blodborne.