I want to start off this whole thing with a nice quote from the amazing film Orgazmo. Take a look before I go into the bulk of what I want to talk about in this posting about the “over sexualization” in the upcoming Metal Gear Solid V and comments made my Kojima.

It is all marketing and exploitation of a major portion of our subculture. This in turn allows for the histrionic types of the subculture, or those posing in the subculture, to exploit both men and women; hence people… To claim anything less feels like just spin doctoring to me. It’s a practice that works because we all let it work and then complain about it in a guise to look more progressive and forward thinking. Don’t fool yourself, you really aren’t. I am all but certain that you are the kind of person here that will complain about how degrading it is to women to have a scantily clad sniper in the game yet be one of the jackasses at Comic Con holding up aisles to get a picture with the attention seeking female dressed in the costume; who most likely also complained at one point about how negative it was to women.

If you don’t buy in yet, take a look here and form an opinion. 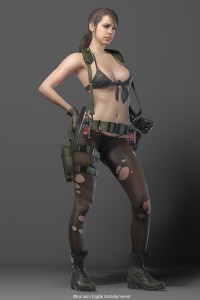 As I said, if this character didn’t look like it fit in the franchise as she does I could see the proper outcry. That is not the case though. Quiet fits and given anime logic she will be almost godly powerful and almost immortal. You know, because the more naked the female the more powerful they are. But I digress.

Can we, in a capitalist society, really harp on a person or a game that is giving the consumer what they want even if it is only a secret want? Yes it general exploits human nature but if it wouldn’t sell would the exploitation still be done? I’d like to think it wouldn’t, but I can all but guarantee that it really comes down to getting the franchise and game out there. So can we all get off our high horses and admit the truth of our feelings? I know quite a few out there who have condemned the comments and in turn the character but are totally going to giggle “boobs” when the character comes into frame. You know who you are. If you don’t then just think back if you giggled just a second ago.

By no means am I trying to be apathetic to everything here but all of you up in arms one way or another need to calm down and think. I agree it doesn’t help the juvenile outlook on our subculture. I agree it doesn’t promote any form of gender equality. I agree that this is also Kojima’s artistic display. I agree that the character fits the game’s universe that has already been beloved and fleshed out, at least visually. Do I find the idea to sell a sexualized character in a game as a product selling point horrible? I do. Do I blame the human condition for this? I do. Will anything change? Most likely not given the wiring every human has. That is at least not until everyone out there fully realizes what is going on and either accepts it, is honest, or fights for a change. Making grandiose declarations that will go out the window or claiming everyone else needs to calm down because it is just a “video game character” will never stick.

Not allowing for one to be exploited, passively or consciously, is the answer. That is if you have an issue with the over sexualization in the first place. For those who don’t have issue, you need to cool it too. Most likely you fall into the passive group as well or the histrionic group who want to embrace the choice.

These opinions are my own and not that of Player Hud as a whole.