Dishonored II: Darkness Of Tyvia may have just been announced via accidental screen capture. Details below.

If the rumors are to be true then it looks like Dishonored II may be coming soon and with a full reveal at this year’s E3. If you look below at the latest image that has been floating around, I’ve been able to track it back to AllGamesBeta’s Twitter post, it looks like someone got a look at the game and snuck a nice little picture of what looks like a presentation screen. I’ll give you a moment to soak it in. 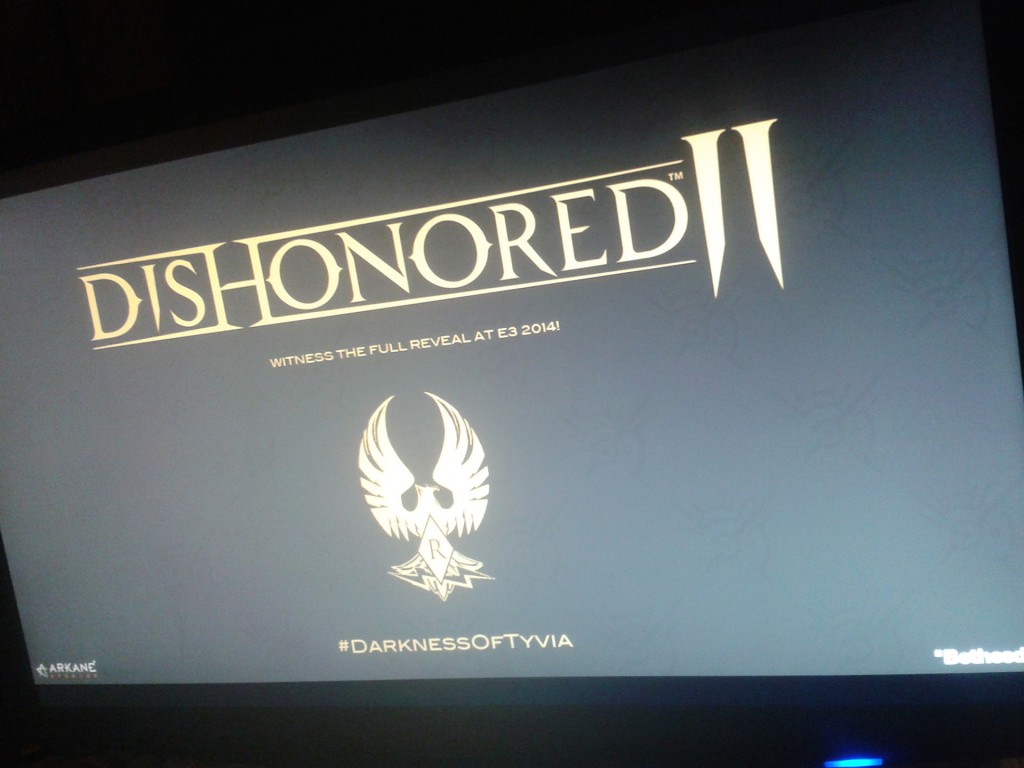 Alrighty then. So this is either a very elaborate rouse to stir the internet about Dishonored II or someone isn’t going to be allowed back at any of Bethesda’s press events. It could also be an elaborate stun by Bethesda to ‘leak’ the information in the wake of Thief as a few other companies seem to have done recently. But that is just speculation as I am one to do. Let’s break it down a bit so we can try to figure things out.

First, I can see a Dishonored II being made as I recall the original being very well received. Why not capitalize on that? So there is a point in this being some form of real deal.

The next bit could easily be done to add credit to some kind of joke or play on our emotions but here we go. In the age of social media PR companies are all about hashtags and this image obviously has one. One that may also be revealing the subtitle for Dishonored II. Also, if you look at the two bottom corners you will see the watermarks that I know usually come added with most announcements or presentations. Especially when it comes to Bethesda. That is from experience at that.

Lastly, this looks to be some kind of closing screen that normally comes after a demo. The fact that under the Dishonored II logo it states that the full reveal will happen at E3 2014 fits in with the standard that most of us have come accustomed to. It just makes sense to me.

I personally hope this isn’t some asshat’s joke on all of us who want a Dishonored II. Signs point to it not being anything of the sort, and the fact that Bethesda hasn’t really said or done much publicly helps too. Then again, who knows yet? I guess we’ll either hear something official soon or we will all have to wait until E3 2014. Then we will all have to wait in line to check out what we can expect in Dishonored II.