I was born when Mad Max 2 hit the big screen and I was barely four when Beyond Thunderdome came out, but that still didn’t stop me from enjoying the films, and the NES game, in my youth. You can only imagine my excitement when I saw the announcement trailer for Mad Max during the Sony press conference. Even though it was all CGI, Avalanche Studios had an Alpha build of the game in the Warner Bros. booth to show to all of us eager fans. Here are a few tidbits that we got to see in the amazing live demo.

One of the things stressed at the beginning is that the story of Mad Max is completely new and only has character names, locations, and enemies to link the films (past & future) to the game. So this is not going to be a film based game that we all have grown to loathe. The story here revolves around Max trying to find his lost vehicle, the Interceptor, in the vast Wasteland.

Along the way it was said that you will be able to pick up 50 different vehicles during the game but we were shown Max’s current vehicle, the Magnum Opus. This is the vehicle pictured below. It is interesting to note that they mentioned that there would be 50 different vehicles in the game, but there is also a vast customization for the vehicle as well. In fact the Magnum Opus was shown changing everything from engine to suspension to tires, all of which to aid in the changing terrains in the Wasteland. I love the vast options, but I think most are going to be left aside quickly.

Continuing on, besides the need to look awesome and mission requirements there is also the need to upkeep the vehicles due to your own driving in the game. For instance, your tires will blow out pretty quickly if they are set for handling sand dunes and not rocks and you decide to take a joyride over that kind of terrain. In fact all of the actions you take with the vehicles have a real world reaction as there is claimed to be 100% real world physics with the cars instead of “canned” animations and from what I saw I’d say it was on par.

Outside of what you will be driving around in during the game we got a wonderful look how combat, both in vehicle and outside, will have you stomping through the Wasteland even more. You have the option to drive around using what you can with your vehicle to bring down your enemies as well as you mechanic, Chumbucket, can fire upon other vehicles with a harpoon to rip it apart. Outside of the vehicle, even though there is the option to sneak, it is frowned upon because it is not Max’s way. He’s more of a “stab you with an exploding rod” kind of guy after all.

I really don’t think words can full describe how amazing Mad Max looks and seems to play. I only wish I would have been able to actually get behind the wheel during the demo. Keep an eye out for more on this game in the coming months. I know I will be. This rendition looks like it will do the franchise the justice that it deserves. 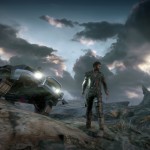 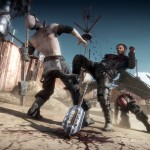 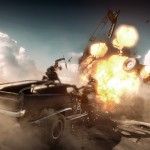