It appears that there is a rental option on the PSN now and we are not talking about the PlayStation Now service.

Back in January we first heard about PlayStation Now and about how we would be able to rent games or have a Netflix style service for our PS3’s and PS4’s. What we are talking about here is not the PlayStation Now service at all. In fact it was something that was randomly found and reported via twitter. Also it is only for one current title on the PSN. That being Catherine. See the following image below to see what I am talking about and we’ll dig in a bit deeper into what is going on. 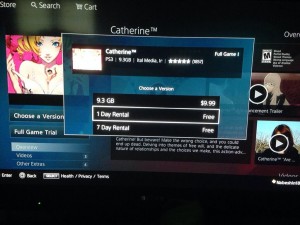 So I have yet to be able to confirm this as I already own Catherine, so do take all of this with a grain of salt but it does look legit. In fact it would seem that the person who found this dug in to see everything that they could. The options it would seem are 1 day, 7 days, and 30 days for starters. It would also seem that the ‘free’ option is most likely a placeholder to see if this is a viable option for the PSN given PlayStation Now is still in the works.

Another thing that seem interesting is that the rental date doesn’t start until you crack open the game for the first time. Similar to the timed trials already out there. The difference being that you get a month before it expires where timed trials you get a year. Once the game has been played once is when your ‘rental’ kicks in. If that is true, then it is a little nice for those who rent a game and just after it downloads the world goes all crazy for them. I’ve had it happen to me so I know the pain.

So given all of that, and if it isn’t just a fluke on the PSN, is this something that will get more of us playing more PSN titles? If you could rent a game for a week through the PSN would that be better than PlayStation Now? Is all of this connected in some way? Who know? All I know is that you all should go home and check to see if you can score a free rental of a full game title while it may be available.