Halo 5: Guardians has been officially announced now by 343 Studios for the Xbox One next year.

While the new installment of the Halo franchise was teased during the huge Microsoft event last year at E3, just weeks before this year’s E3 we get the announcement and release window for Halo 5: Guardians. Good news for all of you Halo fans I am sure although I keep hearing the outcry for a Halo 2: Anniversary to be released on the XB1. That is news for another day though as here we are talking Halo 5: Guardians news.

As is to be expected there is not much to go on yet outside of the usual “this will build on the success of the past titles” and “we expect this to be the most successful title yet.” We do have a nice piece of concept art if you look a bit below but until the massive Microsoft briefing on the 9th of June I wouldn’t expect anything to grand in the way of confirmed news. I am sure there will be ‘leaked’ information or speculation for Halo 5: Guardians that turns out to be true, but we’ll have to wait to be sure.

So go ahead and party in the streets all you Halo fans. We’ll keep you up to date as we can, so please check back often. Hopefully the ‘tech demo’ rumor from earlier pans out so we can have at least something to speculate on here soon. Have a look at that concept art now. 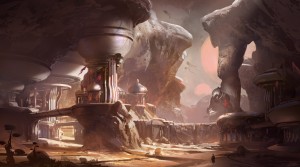