We’ve seen a bit of “open development” with other studios but it looks like Insomniac Games is giving it a go with Slow Down Bull. By open development I am talking about how some studios have been live streaming the process or conducting Google Hangouts to get gamer feedback as they move forward in the process. This is just the case for Slow Down Bull as it will consist of a team of four to five members of the Insomniac crew making this little PC title over the course of “until it is done”.

Not much is known for Slow Down Bull as of yet as it was just announced with nothing more than a concept of some key art but here’s what we got. Slow Down Bull is slated to be a small action game where you control a bull named Axel who likes to collect pretty things. You will guide him along to collect these things and help him try not to give into his raging bull inside. From the sounds of it, if Axel does he will become the proverbial bull in a fine Chine shop. All nice and simple right? 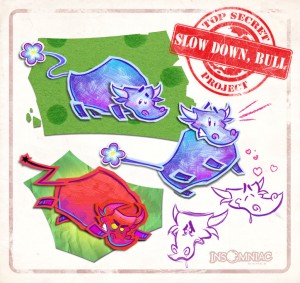 The experiment for Slow Down Bull here begins on June 27th at 2:00 pm PST as Insomniac will be live streaming their process on their Twitch account for all to see. As far as the “experiment” goes it seems to be working for other companies as it amps up the fans well before the games even have the first level built. It will be interesting to see as Insomniac is going in the indie developer format instead of the large AAA format of other companies but we’ll see how that plays out.

If you want to learn more about Slow Down Bull and everything Insomniac you can head on over to their site for now and check back here as we update this little experiment. Good luck to them all.