Telltale games has just announced that The Walking Dead Season 1, Season 2, and The Wolf Among Us will be coming to next gen consoles

Mark this down under not-to-shocking-news as it looks like The Walking Dead and The Wolf Among Us from Telltale will be making the jump to the PlayStation 4 and Xbox One. That is both Season One and Season Two of The Walking Dead as well not just the most recent season. This is all in physical form for both the PS4 and XB1 for all three and also the PS3 and 360 for the titles that have yet to have a physical disc for those consoles. Like I said, yet another option to play or replay these titles on and not all that surprising.

There is no release window for The Walking Dead or The Wolf Among Us in physical form yet but I would place money on that they will both land sometime after the current digital season wrap for both titles. Hopefully Telltale will release that Season One disc for The Walking Dead earlier so we can get all prepped on our next gen consoles for the rest to flood out. That is the hope after all as it would be cool to replay Season Two of The Walking Dead having the save data of 400 Days included in my play experience the second time around.

That is all we have for now sans the following pack shots for The Walking Dead and The Wolf Among Us. As you would expect they look just like the digital “pack shots” that we already know just with the fancy plastic boxes encasing them. We’ll update as soon as we get a release date and price for these titles. Until then sound off and let us know if you plan on picking these up in physical form or if digital is still king for you. 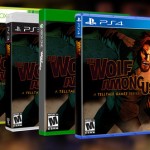