Some new information on a few villains from Batman: Arkham Knight have been let out of the Batputer. Including The Riddler.

Earlier this week Game Informer conducted and interview with some of the people behind the art of Batman: Arkham Knight. David Hego (art director) and Albert Feliu (lead character artist) to be exact. These two talented men also give a bit of insight into what is going on with each character mixed in with how the art style will be reflected. Here’s a quick recounting of it all. 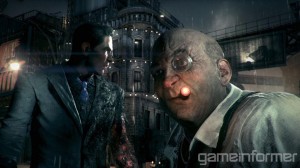 This may sound a bit off out of context as Batman: Arkham City took place during the Christmas time and Batman: Arkham Knight is perfectly slated for Halloween given the main focus on The Scarecrow as the “mastermind.” Hence all the autumn and removal of the coat talk. In theory it should be slightly warmer in Gotham during that time.

It will be interesting to see how they really grime up a character that has almost always been shown as a prim and proper gentleman. Even the Batman Returns penguin was a little more proper than “filthy” even though DeVito portrayed one of my favorite versions of this character. I have faith that Rocksteady will nail it perfectly as they have improved on all the characters in the other titles. At least in my opinion. 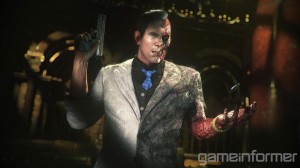 So that kind of explains the “new” but not new look to Two Face in Batman: Arkham Knight and I agree with the sentiment here. I found him to be done well overall although I do find the next-gen look to make him look years younger than before. Maybe it was just my PS3 messing with me but it looks like the better graphically power is like a fountain of youth. Hells, he is even taking a page right out of the hipster book with the rolled sleeves. I jest…but not really. 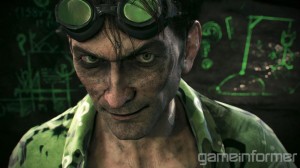 Last and by no means least, we have The Riddler. One of my favorite villains now on the roster for Batman: Arkham Knight. He looks so much cooler here than in any previous Arkham titles at that. Also, what isn’t directly clear in the above quote is that The Riddler’s clothes and demeanor will devolve as Batman thwarts his puzzles and enigmas. Think along the lines of what happened to Batman in the franchise with his costume and clean shave. Stress affects everyone in different ways I guess but I am just happy to read that The Riddler is planned to have a much larger role in Batman: Arkham Knight.

Hopefully we will get more than just all of this soon but this is all we have. I am just excited that The Scarecrow and The Riddler will have key roles. Now if only there was a way to get The Joker back into the game I can have my villain trifecta in Batman: Arkham Knight. Rocksteady and Warner Bros. please release more information sooner than later.