A new screen shot for Batman: Arkham Knight has eked out with a few new gameplay mechanics. Let’s dig in.

We got a look at a couple of the baddies for Batman: Arkham Knight last week so it is high time we get a look at an in-game shot of the titular character, right? Of course it is and if you look a bit lower you can see said in-game view of Batman next to the Batmobile complete with J.J. Abrams lens flair effects. Hopefully that will be limited throughout the game but given the announcement trailer I have a feeling that it will be used so much that we will wish we could just stay in detective mode from Arkham Asylum.

I’ll let this soak in for a minute or two before I move on to the few new details for Arkham Knight. 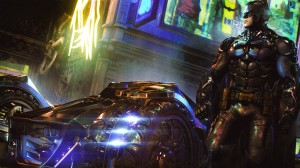 Now on to some of the details that have been popping up as demos of Arkham Knight have been played and spread.

I think one of the more interesting tidbits all has to do with the Batmobile specifically. Like the fact that it can drive through damn near anything while driving around. Stone and steel are mentioned specifically but it is still interesting given that usually you have barriers to steer the player along to the next part of the game’s narrative. It looks like Batman: Arkham Knight is done with that form of limitation which will lead into how Rocksteady is going to try and keep things flowing, especially without a mini-map while driving around Gotham.

Yea, there will be no mini-map so we will have to rely completely on our own knowledge of the city for the most part. I guess that is where the smashing through anything comes in handy. Another thing that will come in handy is that we will still be able to place “markers” in Arkham Knight and while driving we will have a form of HUD navigation on the screen but not a specific map. I’m thinking along the lines of Google Maps but technically that has a mini-map for the real world. Looks like Batman doesn’t have the funds available for a good GPS in the Batmobile.

So no mini-map and you can drive through barriers in Arkham Knight but how does Rocksteady keep things flowing? Well that is through the means of that you will not have to go to an “instance” to start part of the story. In fact the scenarios are stated as to be dynamic based on where Batman currently is in Gotham. So instead of having Alfred barking in your ear that you need to get to a specific location on the map to thwart Two Face you could be driving along and run into the villain doing his evil deeds. Reaching landmarks to move the story forward are trying to be limited inArkham Knight and that will make a bit more sense because villains don’t just sit around waiting for the good guys to foil their plans.

I know some of this sounds a bit odd but I have faith it will work in practice. Rocksteady has given us two great Arkham titles so far and I have a feeling they will want to totally leave on a high note. We will find out in the coming months leading to the launch of Batman: Arkham Knight later this year.