Japan Gets A New Color For The PSP – Bronze

Not only do they get all the new stuff first, they also get all the other iterations of colored PSPs. Coming on the 24th of April, they can add yet another color to their arsenal of colored PSP. It will be a Bronze color, like the title said (Yea I know, big surprise right?). This of course comes about a month after the Monster Hunter limited edition version of the PSP. Jeez, they either go through these things like disposable phones or they just gotta have ’em all. 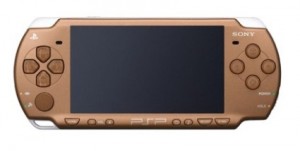 Don’t fret though for those not in Japan. We are getting a new special edition God of War Red PSP. Which will of course bump it up to *Drum Roll*, oh…Um…Two. That was anit-climatic. But I guess it’s better than nothing.