I’ve said it before; it’s tough not to grab my attention when I get shown a video game. But it is tough to pull me away from one that already has my attention. Zombie Studios showcased their game Daylight at the Astro Headset Booth, which was close to Square Enix, my favorite developer/publisher, and right next to Wizards of the Coast, makers of my favorite TCG, Magic: The Gathering. This is an incredibly difficult location for a game to be showcased if it wants to keep my attention. Zombie Studios had no trouble reaching that feat.

Zombie Studios is a developer company based in Seattle, Washington. The Team consists of developers who have worked on such titles like, Blacklight: Retribution, F.E.A.R. 1 and 2, Condemned: Criminal Origins, Saw, and many others. Their line-up only proves they know how to make visually stunning games, as well as compelling and creepy single player games. Daylight is set to reinforce that fact. 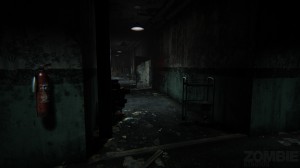 Daylight is a first-person survival horror game where you play as an urban explorer who enters an abandoned hospital. The developers at PAX East would not give me more information in terms of the story of the game, such as why the demo starts you off waking up in the lobby of building with nothing but your cell phone as a light source and compass. Immediately you set off and leave by way of a second floor door from the lobby. What is most impressive about Daylight is that from this point on the map is always different every time you start a new game. You have an inventory space of whatever you can pick up with your left hand. Whether you choose to hold onto a road flare or a glow stick, you will have to find one first. While holding onto a road flare or a glow stick you may find pictures or words on walls that will only show up while you are holding the light source. Also what shows up using one source, may not show up while using the other. 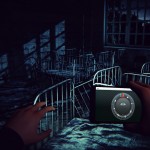 So what about the things that show up on the walls? Are they part of the story for Daylight, are they puzzle pieces, or guides that can help you along the game? I have no clue and the developers didn’t want to divulge much information on them. At one point I found what I thought to be a map, but upon attempting to confirm it with the developers, they neither confirmed nor denied my suspicions and managed to refrain from any context clues to help me figure out the answer myself. After getting turned around several times and ending up going through hallways I had been through before and not knowing where to go, I was informed that careful study of the ground will show your footprints giving you some knowledge on whether you had been this way before or not.

The game uses possessed artifacts as keys to unlock doors. I only found one during my playtime; a doll in a room full of cribs. The doll would at times cause the hand holding it to twitch heavily or would subtly, yet noticeably, move on its own. Upon reaching the door that it unlocked the doll and the door turned to ash. As you traverse through the building you may walk up to doors that you would like to open, but immediately find out you can’t open them by boards flying over the door and nailing themselves in place. 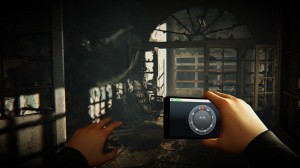 Every new game generates a new map and because of that generates different key locations and sequence triggers. At one point while walking I began hearing soft ominous whispers before the face of a doll appeared on my screen nearly scaring me away from the game. I had to stop for a second to slow down my heart rate before I continued. At another point I triggered a music sequence that kept me on a swivel looking for something to attack me. The character I was playing also began mumbling to herself and whimpering. That didn’t help my nerves at all. But from start of the music to when it stopped nothing popped out and tried to kill me. The developers confirmed that all triggers are randomly generated at start of a new game and just because you hear the music doesn’t mean you are in danger but it also doesn’t mean you aren’t.

With the rotting style doors, the darkened corridors, and the randomly moving objects, the game keeps its creepy levels up next to Amnesia and even jumps above it with the lack of consistent warnings of upcoming enemies. I for one cannot wait to play the game. My first goal for when it releases is to beat it in one sitting without having to turn it off because of fear of my heart stopping. Daylight will be releasing Q3 2013 for Steam.