New details on the PS3 & PS4 Watch_Dogs exclusive content have been announced. Here is what we are getting.

If you have been waffling on which platform to get Watch_Dogs on we have some new information to help you make up your mind. Even though it hasn’t been a secret that those who opt for the PS3 or PS4 version of the game will be getting some exclusive content, it has never been clarified and explained outside of “an extra 60 minutes of gameplay.” The wait is now over though as we have a trailer showing off the four extra missions that add said gameplay. Not only that but a new costume and in-game perk.

Let’s start with the new character skin for Watch_Dogs. It is dubbed The White Hacker Suit and can be seen by just looking a little lower on the page. So an all-white suit to sneak around and “Hack The Planet” with. That seems a bit counterproductive given that I haven’t seen a whole lot of snow or white in any of the Watch_Dogs footage to date. Won’t that make you stick out in a crowd or in a dark alleyway more? Also seems odd as that isn’t the traditional black/dark theme that comes with almost all other PlayStation exclusives. I guess it may throw off people who are playing multiplayer a bit if they are used to tracking the traditional Aiden. 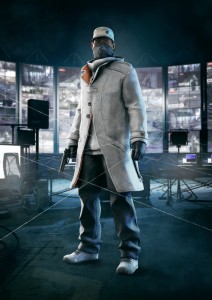 Next we have a hacking boost perk that is also “exclusive” for the PlayStation version of Watch_Dogs. Not much to go on there but I am guessing it will give you more time to get in and out of a system or allow you to hack more complex things near the start of the game. Or something the likes of any other game perk that can be picked up.

Finally we have a clip showing off all of this and the four “exclusive” missions that is the real selling point here. Why would you not want the extra gameplay for Watch_Dogs? Outside of brand loyalty I can’t fathom why you would turn down the extra free game time in a world where games seem to be getting shorter. Yes it is a marketing ploy to sell one version over the other but as the price doesn’t change for the game it just makes sense. Unless the below extras don’t tickle your fancy.

I’ll let you decide still but it makes sense that you would want more bang for your buck when Watch_Dogs lands on May 27th.