Follow the grim tale of fifteen-year-old Amicia and her five-year-old brother Hugo. In a heartrending journey through the darkest hours of history. The siblings are being hunted down by the inquisition and surrounded by massive swarms of rats. Amicia and Hugo will come to know and trust each other. As they are overwhelmed by the horrors of this dark brutal world now enhanced for the PS5.

In the dark ages of France Amicia and Hugo De Rune were driven out of their home after the Inquisition killed their parents. Which takes their journey out into the dark world of France. Hugo has a sickness and swarms of rats are killing animals and humans to make it even more traumatizing. The two siblings are being hunted down for nefarious reasons and need to uncover the truth that is out there. 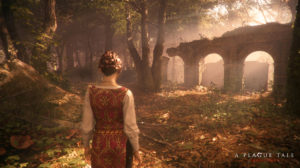 A Plague Tale: Innocence felt more like an adventure game than an action one. Most of the time you are spending sneaking and running rather than engaging in combat. I understand you are playing as kids up against adults who want them dead, but if you get caught you die instantly. In most areas in the game, you are required to sneak through allowing you to use the materials you have and manipulate the environment around the area all while keeping Hugo and yourself safe. The main issue is that each level feels like they have a set solution, there is only one way instead of having a choice to your approach and sometimes you will be able to do some creative things throughout the game. 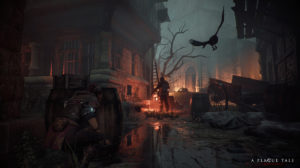 First up, I have to say that A Plague Tale: Innocence on the PS5 feels and looks awesome. The usage of the DualSense controller makes you feel immersed in the game. You can not only feel the tension of the sling but the haptic feedback when running is fantastic. When Rats are chasing you, you can literally feel them. When moving over different types of terrain like mud it can feel more different than moving through solid concrete or tile. Having these new features makes it more tense and horrifying. It brings out the true nature of the world and its surroundings in A Plague Tale.

The visuals have a nice overhaul for the most part; it is as if it looks like a remastered version of the PS4 version. Everything looks sharp with enhanced details, the lighting is very impressive, it really helps with the immersion of the game. A Plague Tale also runs fantastically smooth with 60 frames per second. Another improvement is the implication of the new 3D audio. It refreshes the game’s sound you can hear the rats munching on human flesh, screams of people, and the overall enjoyment of the environment. 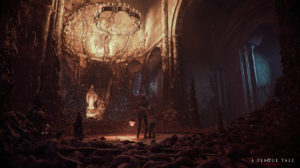 With the improved visuals and the amazing use of the DualSense, the PS5 is the best console to play A Plague Tale: Innocence. If you are a big fan of story, stealth, and puzzles games, this game is something you will want to play. Even if you are not a big fan of those games the story and character development will have you so interested that you will ignore some of your dislikes about the game. Mixed in with some highly detailed puzzle designs and mechanics, this game will be well worth your time.

A Plague Tale: Innocence was developed by Asobo Studio and published by Focus Home Interactive for the PS5 and Xbox Series X on July 6th, 2019. A PS5 copy of the game was procured by myself for review purposes.