We all love a spectacle and show to have out there in and outside of our games out there, and that seems to be a bit of the premise we have here for Circus Electrique. This is the latest turn-based RPG out of Zen Studios and Saber Interactive that gives that gameplay in the setting of a steampunk circus out there in London. That may seem like a whole lot to take in, but this is the Circus Electrique. Which, I know does not fully suade you one way or another for the game, but that is where our review will come in here. That way you can figure out if you also want to give it all a go on the PS4, PS5, Xbox One, Xbox Series X|S, Switch, or PC. That way you can put on the greatest show too if you so wish.

Step right up and take in the wonder of the Circus Electrique! At least until one of the elements of the shows seems to go a bit wrong and a fit of madness flows out there into Victorian London. A madness that causes some of the performers, Bobbies, and other denizens out in this steampunk world to become a bit more violent. This is where our ringmaster and his niece need to step in to help guide the sane performers to go out there and help save the city while trying to uncover what caused all of the insanity out there. All while still keeping the tents up and running to give the rest of the population a solid distraction to hide the insanity. 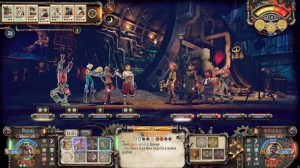 The premise of Circus Electrique is amazing and I am always a sucker for a good turn-based RPG, but sadly one of the things I kept feeling was lacking was any kind of deviation from the pattern or strategies needed out there. I know that there are various characters, performers, and ways to attack each of the bits of combat in the game, but I always seemed to default back to the same starting characters along the way. During my whole time, I only ever ran into one fight where it felt like the starting characters could not fully handle the challenge of the fight. This led me to a lot of repetition in Circus Electrique and a bit of basic boredom when it came to the combat. This might not be the same for everyone else out there, but this had to be one of the portions of the game that I always dreaded getting into unless it was one of the big boss fights.

My next big issue when it comes to Circus Electrique boils down to how much micromanagement you also have to do in the game. This is beyond the basic character progression and managing the circus along the way. Those were always the two main points from the announcement of the game, but after a while, it started to feel like we had to keep an eye on everything in the game beyond just focusing on the bigger parts like combat, story, and show performances. This is not going to be an issue for many out there when it comes to Circus Electrique, but I did not have much fun when it came to finding resources to craft, find collectibles, or set up seers to help map out the areas. It felt like these were just little extras that should have had an automated mode option so we could focus on the bigger elements. That is coming from someone that is not a fan of micromanagement, though, so take that into account.

Lastly, and it might have just been me, comes down to the combat AI in Circus Electrique. It felt like it had two modes when it came to the enemies out there. Either they were so basic that it felt like they were always asking to be beaten down or they were amped up to the point where it felt like the game was trolling more than anything. There were a few fights where all the enemies did was keep stunning or combat-blocking my characters so nothing else could happen in the fight. It is not a bad strategy, sure, but in my play of Circus Electrique there were a few fights where I went multiple rounds where nothing changed due to this. As if the AI was just doing it to do it and not to set up any attacks on my Health or Devotion of my characters. 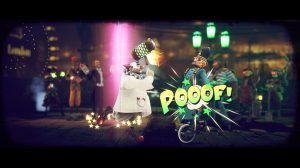 While I did gripe on the combat in Circus Electrique a bit, I do have to say I rather enjoyed all of the boss fights I came across in the game. Sure, the basic mechanics were the same, but this is where it felt like the design and AI seemed to shift a bit and give us a twist to things. One that comes to mind right away was a giant robot that had a few little helper bots. In a normal fight, I would just take out the helpers and then aim for the big tank. I did that here only for it to show that it could spawn many new helpers and almost undo all of the work I just made to bring them down. This structure continued through to all of the other bigger fights in Circus Electrique and felt like it was taking all of the true aspects of the turn-based combat and strategy into account. Like everything down to day/night and other weather mechanics had to be used and this kept me going to get to the next big one.

The other bigger aspect of Circus Electrique, the circus management, was also another big thing that caught my heart here. Even if I would have loved to see the actual performances happen, it was a lot more fun than expected to try to mix all of the performers together to put on the best shows possible. Given that some do not get along with each other or their acts do not complement each other, it was a fun bit of planning to get the best out of everyone in these little settings. All to get their best synergy and compatibility scores to not only get the best rewards but the best headlines in the newspapers. Yes, there are critiques of them after each day passes by in Circus Electrique so you can try to review and do better with the next one. A nice little touch that goes beyond just showing how many fans and money was made during the show. Just a little extra world-building for me, that I am all for.

This all brings me to the last major thing I loved for Circus Electrique, the setting and story that were all mixed in too. I will not spoil the story here, but the A and B plots running in the game were just as solid as so many other titles out there, I just did not expect it. All while blending in some amazing character designs and areas in this Victorian Steampunk London. Even when some of the NPCs seemed to have things pulled from our modern-era, the team at Zen Studios did a great job to make them feel right at home and possibly in the world too. Which worked even better when you would try to question how some of the characters could pull off some attacks, feats, or other abilities in the game. There was just as much visual storytelling as there was verbal and that all led to a grand experience as the spectacle of the show was trying to push out there. 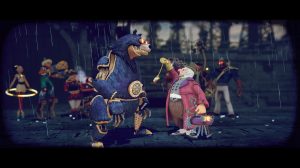 Even if Circus Electrique did start to feel a little repetitive at times, I enjoyed every minute of my experience with the game. Did I wish there was a lot less micromanagement? Sure, but that is not going to be a request that everyone will have. Would it have been nice to have a more diverse AI system for combat? Also sure, but then I do not know if the big boss fights would have hit just as hard as they did. In the end, though, Circus Electrique is a solid turn-based RPG with a whole lot of world and story to offer up. To say I recommend picking it up is an understatement, as even with the review over, I am ready to hop back in and give it all another playthrough right now. You will not be upset at all with the game unless you fully hate turn-based RPGs or any form of character management titles. Then you might want to give it a pass.

Circus Electrique was developed by Zen Studios and published by Saber Interactive for the PS4, PS5, Xbox One, Xbox Series X|S, Switch, and PC on August 26th, 2022. A PS5 copy of the game was provided by the publisher for reviewing purposes.