Crypto is back again… again with the launch of Destroy All Humans! 2 — Reprobed on the PS5, Xbox Series X, and PC here. Another remake of the classic IP that Black Forest Games has taken on to bring back the little guy and allow us all to destroy more of those humans out there. This time during the 60s and with some of the repercussions from the previous Destroy All Humans! That being the most recent remake that we had for the IP and not the one from so long ago. All of that said, though, how does this one hold up to it all? Here is our review on just how well it was brought forward to the modern systems and times for us all.

Crypto is still sitting pretty after the events of the previous Destroy All Humans! as president, but things are not all cupcakes and sprinkles. All manner of things are going sideways in the world and the Furon Mothership is destroyed. Not wanting to sit back and take that, Crypto sets out with Pox to find out what happened, collect missing pieces of the ship, and squash many of the world’s uprisings that are going on. Those dirty hippies and Russians are always getting up to no good. I guess this is why we have a whole new arsenal of gear to put them all back in their place or worship our alien god out there. All Hail Arkvoodle… 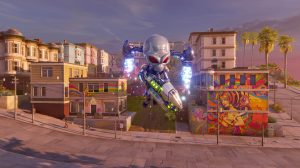 Weirdly enough, many of my dislikes I had for Destroy All Humans! 2 — Reprobed are some of the same issues I had with the previous remake/remaster that Black Forest Games did. Mainly when it comes to the audio for the game. Obviously, some of it has been re-recorded while others are reusing the assets from before. This leads to a weirdly disjointed audio mixing in the game where some of the sound effects sound very sparse and others hit with ferocity. In fact, there were some sections in the game where there was mass panic from many NPCs but only one or two could be heard. Not to mention entire scenes where none of the background audio or NPC dialog could be heard. Only Crypto’s. It is weird that it is still plaguing the IP after all of this time and with the issues getting resolved the first time around.

From there, we have to look at the tutorial portion of Destroy All Humans! 2 — Reprobed and how they also feel a bit lacking. Maybe this is due to the previous remake coming out not too long ago, but there were gameplay elements from the start that I had no clue about or was given the basics and expected to understand the full gravity of them. I went most of the game forgetting I could pop heads out of the human’s bodies until there was a mission much later on that asked for it. I remember doing this all the time in Destroy All Humans! and here it was a good few hours in before I was prompted to do it again. Not to mention the tutorial text coming in once and feeling like it was buried in the menus to see how to do something I might have missed. Not a good way to get me fully in on the mechanics and missions at hand.

Lastly, and this builds into the above a bit, some of the missions and auto fail components again that Destroy All Humans! 2 did not always let us know were there. Not a massive problem and usually a needed aspect of a game to keep us all on track, but if they are not indicated from the start it can be truly upsetting. Not to mention that some of your upgrades, later on, can make them happen by simple things such as just landing too close to an NPC. In one instance, I was searching for someone in the game that I was aiming to unalive as part of the mission. I wanted to go about it stealthily and tried to land behind a hidden wall. The only issue is that I forgot that I had an upgrade that sent out a blast in all directions when landing, turning my quick sneak into an auto kill, thus ending the mission. Not a game breaker for Destroy All Humans! 2, but definitely not something I enjoyed having to always be on the lookout for since it was part of the upgrade tree. 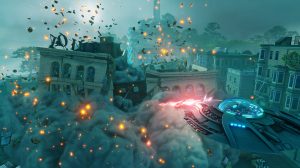 Right out of the gate, if someone asked me when Destroy All Humans! 2 came out based on this version alone, I would be hard-pressed to not say it was not always a next-gen title. The team has done an amazing job to make this one feel like it was a completely next-gen title and nor just a remake or remaster from the past. All of the mechanics and visuals felt like something we are getting in new IPs right now. This is something that needs to be taken note of as Destroy All Humans! 2 — Reprobed will introduce so many new gamers to the IP even if there weren’t even a twinkle in an eye when the game first launched. It even feels like it is more of an advancement over the previous remaster that the team put out there too and not just another rehashing of a title that is over fifteen years old at this point. A solid tip of the hat to all of this here.

Graphics aside, though, the team also felt like they tightened up all of the controls in Destroy All Humans! 2 in the same regard too. Given some of the precision that is required to move about the world to sneak and hunt down more humans, it was nice to have it be as close to perfect as possible. It was easy to aim both weapons and powers around the game’s world to make sure it was on the user side if there ever was an error out there. This does make surviving through the various missions out there much easier. Given how many there are in terms of side missions and main missions, these perfected mechanics are always what we want in our video games out there. Black Forest Games definitely seems to know how to do this and can hopefully keep that ball rolling for as long as possible out there.

Some of that also has to come into the effect of just how well the story and humor of Destroy All Humans! 2 was crafted out there and then built upon here yet again. Even if you find games like this to be more on the monotonous and basic side, the script and humor that is mixed into all of the outlandishness of the game help it soar once more out there. Even the crass and sophomoric humor in the mix of it all brings a good chuckle along as the story lampoons so many stereotypes of humanity along the way. For me, it had me heading out to make sure I did all of the side missions more than the main missions so I did not miss a fun little joke along the way for it all. I know this will not be a game-selling element for all, but it was something I know I needed and thinks the rest of the world needs when it comes to a good and weird laugh. 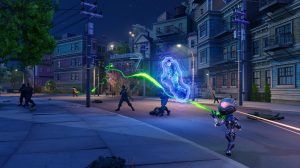 Plain and simple, if you loved the original Destroy All Humans! 2, then you are going to want to add this title into the mix of titles for you to play. You will get that nostalgia as you do just as the title tells you to do but all in a form that feels next-gen out there. If you have never played anything in the IP before, but still like platforming shooters, then you should give Destroy All Humans! 2 — Reprobed a solid try. Even with some of the missteps I had with the game, it was overly enjoyable still and also filled with all of the basic humor needed to bring a solid smile to my face. Not to mention being able to replay so many of the missions over and over to relive some of it as often as I wanted to.

I give Destroy All Humans! 2 — Reprobed 69 (Nice) Brainstems on the Brainstem scale.

The Mortuary Assistant was developed by Black Forest Games and published by THQ Nordic for the PS5, Xbox Series X|S, and PC on August 26th, 2022. A PS5 copy of the game was provided by the publisher for reviewing purposes.

Destroy All Humans! 2 — Reprobed — Like A Drowned Mole? [Gameplay]