We Sit Down And Review Escape Dead Island. It is a new spin on the Dead Island franchise all to expand the franchise but does it? None The Less Here Is Our Review

The time is upon us to try and Escape Dead Island. No not to try and escape the need for the franchise but to actually play through and hopefully enjoy Fatshark’s new take on the Dead Island franchise and to give us a bridge until the next major sequel to the core franchise hits our gaming shelves. Do Deep Silver and Fatshark have a great title for us on the PS3, Xbox 360, and PC or is the cell shading style just as dead as the zombies we need to escape from. Here’s what I have to say in my review of Escape Dead Island.

We start off with Cliff Calo who is pretty much Seth Rogen’s version of the Green Hornet from the film. He’s an over-privileged son of a media mogul who is out to prove to daddy that he isn’t a waste of space. This leads him to one of the outlying islands around Banoi where only rumors of the events from Dead Island have been released. Cliff and his crew arrive only to find that the rumors may not be what everyone online was thinking; or that they actually are. Unfortunately the crew gets stuck on the island and need to Escape Dead Island to break the story around the world. 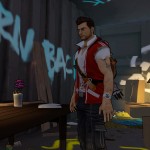 Right out of the gate and unfortunately for Escape Dead Island the controls for the game are as plagued with bugs as Banoi was plagued by zombies. Even with the options that you are given for the layout I was still hit with issues like not being able to start a melee attack from a crouched position. This lead to being surrounded by infected who spotted me and not being able to attack until I hit the crouch button again to stand up. This even happened when I was not in an area too tight to actually stand but even in those cases the infected where able to swing through barriers as if they weren’t even there just for them.

This brings me to the next glaring issue I found. The stealth mechanics for Escape Dead Island, while not the core gameplay, where just as spotty. On top of being able to attack me through walls the infected could also detect me through them even though I had made no noise. Almost like they were also able to see through them too. This really hurt the early experience of Escape Dead Island as you are pretty much required to sneak about as Cliff cannot handle more than one zombie at a time given the lack of weapons and health. You’d think that this would be the most perfected portion of Escape Dead Island but I always quickly found myself giving up the sneaky approach for the more direct approach. 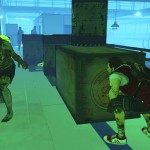 Last on the plate for the big gripes as to be about half of the voice acting. I think that the VO for Cliff and his crew are completely spot on. Most of the other characters that show up in Escape Dead Island, even favorites from Dead Island, have the most bland and skip-able things to say. Okay, not really what they have to say but it’s almost like everyone else went to the William Shatner School for speech giving when there is really no need to have dramatic pauses. Unless there is a need for this there is no real reason to use it unless you want the person speaking to sound like they are currently having a stroke.

I think the cell shading and comic book style used for Escape Dead Island is an uplifting and welcomed change for the franchise. I’m not saying that all the future Dead Island titles need to go this route but it works here. It works insanely well here and it was a great break from all the realistic zombie games and most other games that are flooding the market over the last few weeks. It even went further by adding all the sound text into the game where most others that take this style do not. It was a great play with the look and I rather enjoyed that by its self. 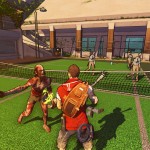 It was hard to get through at some points but Escape Dead Island‘s story and addition to the franchise was just as fun as the other Dead Island games. The big difference here is that you could actually keep following it without getting distracted with how many other ways you could kill the undead. That was always my issue with the other titles in the franchise which led to a very broken feeling story. Escape Dead Island has very few lull points like that and always keeps going while keeping all of the fun that we have grown to expect with the IP. Even when Fatshark tried to make things a bit confusing and off the wall it was all extremely well welcomed.

Last but not least at all were the insanity events that were thrown into the mix of Escape Dead Island. These are the world breaking and bending things you may have seen in the previous trailers for Escape Dead Island. Mostly they appeared as shipping containers falling from the sky. While there were quite a few of those kinds of events there were others that played out in such a great way I had myself asking if I broke the game or if it was just “fucking with me.” Other titles have tried to add these kinds of things and have fallen a bit flat but in Escape Dead Island they added the extra intrigue and fun that they were meant to do. Although I still have yet to actually question my own sanity based on any to date… 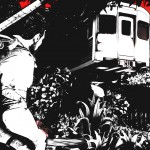 If you are a huge Dead Island fan then you will most likely be able to fight through the issues of Escape Dead Island to add the game to your list of owned. You will need to take a run at it pretty much ignoring the stealth play once you can if you want to make any headway though. Unfortunately that seems to be the core fan base that will completely enjoy Escape Dead Island. It really isn’t for everyone as the controls and other issues are too glaring to make it fun for your average gamer. Escape Dead Island should be classified as a fan title as they will be the only ones to put up with the issues long enough to enjoy what I mentioned above. It’s sad but unfortunately true.

Escape Dead Island was developed by Fatshark and published by Deep Silver for the PS3, Xbox 360, and PC. Escape Dead Island released on November 18th, 2014. A copy of the game was provided by the publisher for reviewing purposes.