We sit down and review Evil West. A different kind of romp through an alternate Wild West. Here is our review of Evil West

It is time to saddle up and set out to ride into the Evil West out there with the recent launch of the game of the same name here. A new action-adventure title from the minds of Flying Wild Hog and Focus Entertainment that places us in a whole different form of the Wild West. A different form in the way that it is more steampunk and filled with all manner of monsters. Mostly vampires, but that is only the tip of the iceberg as we venture out into the wilds of Evil West. Now, though, is the time for us to sit back and let you know if you should grab a partner and head out there too. Here is our review of the game and how it lived up to any expectations out there.

This are starting to amp up out there in the Evil West. Jesse Rentier and the institute of monster hunters out there are on the case to bring an end to all of those horrors out there. The vampires, well they are not taking too kindly to that and want to stay on top. More so since it looks as if the humans are starting to dwarf them in power with each new technological marvel that comes into existence. Now that they have a plan, Jesse and crew need to make sure it fails so humanity can carry on and live none-the-wiser about the horrors that roam this new version of the Wild West out there. 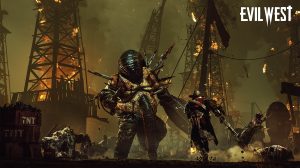 I will never understand it when action games force us to use the shoulder buttons in a melee combat style game as Evil West is. It makes sense for them to be used when it comes to shooting, aiming, and other extra actions since that is the norm, but in this title, you will have to keep mashing those triggers and shoulders nonstop to do anything. Punching, blocking, dashing, and shooting. All with no way to alter the controller scheme to a specific style that would work better in Evil West. Sure, it would make sense to force this scheme if there were many other things that the face buttons needed to be sued for, but in Evil West they are used for interactions and not much else. It feels so odd to go this route and makes the action in the game feel off. If anything, why not just give the option to remap as we wish?

From everything we have seen for Evil West before now, it also looked as if it was going to be a title that had some level of exploration and need to not follow a specific path. Almost like a title like the early versions of God Of War where there was a direct path but also hidden nooks with extra treasures along the way. That is the case in Evil West, but it also has too many traversal places that you can not backtrack through. Even when it is a simple barricade that has been hopped. It works in the game, but also leads me down paths I wish I could go back as there was no indication that it was a side path or the main path. For completionist out there, you will find that you will be reloading to the past so you can search the areas you meant to but felt tricked into going down the wrong path for.

Another thing, and it is more of a nitpick here, comes down to some of the cinematics in Evil West and how jarring they felt to shift between. It looks and feels like it was all made using the game engine, but instead of forcing it all to play out, the video quality shifts down to play a recorded cinematic. At first, I thought it was a loss in quality during the live play, but when the game shifted back to my control, the visual quality spiked back up to what I had expected it to be the whole time. It was a weird choice to go that way with it all, and I know not every studio has a dedicated cinematic team, but it brought me out of Evil West every time it happened. Especially since if it was pre-recorded, it should have looked better than the game as it was just a video playing and not a scene in the engine playing. 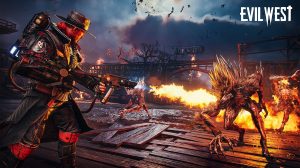 The one thing that caught my eye for Evil West when it was first announced was the setting. When playing the game, that kept selling me the whole time and it only got better. Not only was it a Weird West kind of thing, but the lore and world-building in the game made me want to delve deeper and learn more. It was almost like we got Wild Wild West and Abraham Lincoln: Vampire Hunter all in one game we could enjoy. It might sound silly, but it works and was a fun new thing that made Evil West stand out from the other various monster-hunting titles out there. By monster, I am talking about the traditional vampires and werewolves before you think I am talking about any style that has out there finding massive beasts to bring down. Even if there are a few in the mix of all of this too.

Now, while I griped on the controls for Evil West before, that was not something that completely broke the game and the experience for me. In fact, after learning them, I felt like it was possible to blend so many motions together to get some crazy attacks and finishers in the mix. All while keeping a solid challenge along the way that made me want to play the game with a friend and not just in a solo mode. Even when some of the challenges would have been easier, Evil West always kept me feeling like I was just on the verge of failing but then becoming the hero to overcome it all. A nice little hidden gameplay feature that has been lost for so many other titles out there. It is all about the power fantasy and getting to punch things with a steampunk fist, and that is how it always felt here with this one.

I know I have left it out until now, but in a game like Evil West, there should be a lot in the form of gunplay too. It is the Wild West after all. That was one of the better features I had to play around with in the game that I thought was going to be rough from the start. We get a mix of them all and they all feel different and fitting for the scenarios too. Like the quick fanning of bullets from the revolver, the quick snap-to-snipe of the rifle, and even the area blasts of the shotgun. Each of them serves a function and feels needed in Evil West. Not to mention feel called upon in the mix at the best times to make Jesse feel like an action here more than a thug with guns. I almost wish that it was used much more than the gauntlet in the game, but there is a good reason for the story why that has to be the case. Not to mention that if you are skilled enough, you can play a good chunk of the game with just the guns too. 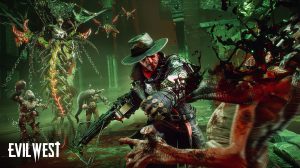 For many out there, Evil West is not going to feel like the game that was sold from all of the trailers and videos we had leading up to now. For some, it will be a great deviation, while for others, it will be something a little more wanting out there. In general, the combat is solid as is the exploration of the game while being fed the story and lore. I do wish there was a way to change up the controls a bit for Evil West and that the cinematics were truly in-game, but in the end, it all works. Those that are fans of any of the IPs I mentioned above will love this title, though. It is a shift from what we know in the current industry but in some ways, that is the best part of it all.

I give Evil West 4728 Gold Pieces on the Gold Piece scale.

Evil West was developed by Flying Wild Hog and published by Focus Entertainment for the PS4, PS5, Xbox One, Xbox Series X|S, and PC on November 22nd, 2022. A PlayStation copy of the game was provided by the publisher for reviewing purposes.