Magic The Gathering: Duels of the Planeswalkers 2014

Back in April, I wrote an article showcasing what I had seen of Magic The Gathering: Duels of the Planeswalkers 2014 during my interview at PAX East. I had been waiting for the game to be released so I could hop into it and get my first look at the new Magic The Gathering 2014 Core Set expansion since, as always, I knew that all MTG players will get their first look and get to play with the cards first in DOTP. I was also excited to see what the new game type would be, since the last two games introduced Archenemy and Planeschase. When the day Magic The Gathering: Duels of The Planeswalkers 2014 released, I immediately lost myself in the game. Needless to say, I was happy to have a new set of cards to strategize with. 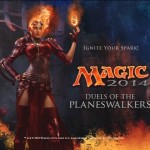 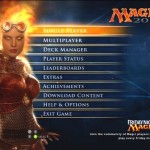 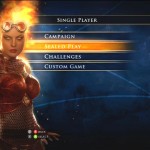 As I saw at PAX East, Magic The Gathering: DOTP 2014 has been re-skinned from the ground up, starting with a brand new menu UI. Instead of the swivel picture menu that has been used in the last three DOTP games, 2014 uses a standard list style menu, which makes going through menus just a bit faster. The achievements/trophies section has been given its own menu selection rather than being found in the Player Status section, as it was in the last 3 games. Chandra Nalaar dominates the screen in these menus, as she is the main protagonist for this games story line, besides yourself that is. The game features your standard campaign and challenge game modes, and features a Sealed Play campaign as the unique game type. 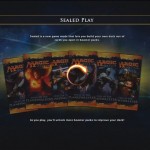 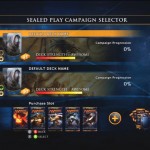 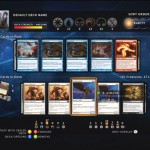 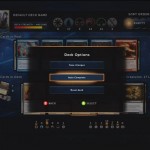 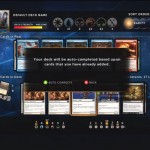 Sealed Play is a game mode where you open booster packs and create a deck from the cards granted by these packs. You begin by selecting a Sealed Deck slot and opening 6 14-card Booster Packs. You are then taken to a deck building menu where you can build a deck from the cards you received. The cards in the booster pack are random, so whatever cards you get aren’t always the same as someone else playing. You can build the deck your own way, or have the game build a deck from your cards on its own. You can also select some cards you want in the deck and then use the auto build to complete the deck for you. This feature is of great use to both new and experienced players alike. The auto build will take the best combination of cards from your pool and also add a corresponding amount of mana. You are given two deck slots for sealed play. Each deck slot will have different booster packs for when you open them. You can also purchase another deck slot if you wish. Each deck slot will have its own Campaign process and completing matches may grant you new booster packs to enhance your sealed deck with. Your decks will show the strength of your built deck next to it and you can also change the name of your deck to your choosing. 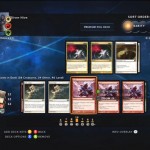 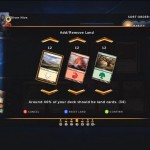 The deck manager in game has been changed to allow you to control almost every aspect of the deck you are playing with. While you still cannot add cards from other decks or the massive library of cards in the game, you can now control how much mana is in your deck, and what color mana you are using. Which means if you are using a green deck, you can add blue mana to it if you so choose, even though that won’t really be much of a good idea as you won’t have any blue spells to cast. But it’s great to know the option is there. Unfortunately you will only be able to use your fully customized Sealed Decks in Sealed play games, and must stick to the standard decks in Two-Headed Giant matches and the main campaign. 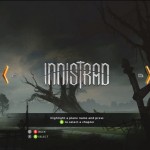 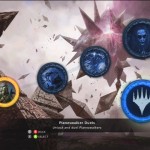 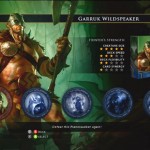 The Campaign story line for Magic The Gathering: Duels of The Planeswalkers 2014 follows Chandra Nalaar in her quest for revenge. After learning of an ancient fire scroll from another Planeswalker, Chandra sets out to steal it and follows a map on it to the plane of Zendikar. She is ambushed on this plane and decides to seek revenge on the person who guided her into the trap. The campaign begins with a duel between you and Chandra. After defeating her, Chandra enlists your help to track down Ramaz, the planeswalker that led her to the scroll. She speaks to you about 5 leads that she has to find Ramez. The first being a pendant she was given by Ramez that came from Innistrad. In previous DOTP games, you were not required to play some of the duels in order to advance the campaign. You only needed to win certain duels in order to advance the campaign. Because of this, each chapter of the campaign would have 6-8 duels with only 3 specific duels needing to be played. The other duels were there to help you earn more cards for decks, since you unlock one card at a time for the deck you are using by winning a duel. DOTP 2014 only has 4 duels per chapter, but you must complete each on in order to unlock the next duel in the sequence. After fighting the planeswalker at the end of the chapter, you unlock the next chapter of the campaign as well as the chance to duel one of the 5 main planeswalkers, in order to unlock their preferred deck. The results will allow you to unlock a total of two new standard decks per chapter, with the second deck unlocked being whichever of the five main planeswalkers you choose to face: Garuuk, Adjani, Chandra, Jace, or Lilliana. 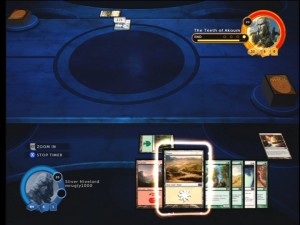 The game’s look and feel is still familiar to players who have been enjoying the DOTP series, yet still new and highly polished. The game allows you to choose which mana combination you use to summon creatures when you have multiple colors of mana. If you choose to play a creature that uses less mana than your full amount. You can choose the combination from a set of pre-defined combinations, allowing you to put more strategy into your game play. This also opens up the possibility for players to mess themselves up if they aren’t paying attention to what they are doing and use the wrong mana combination.

Magic The Gathering: Duels of the Planeswalkers 2014 is available for Xbox, PS3, PC, Android phones and tablets, and IOS. The game currently retails for $10 on Xbox, PSN, and Steam and is free on iPhones, iPads, and Android gadgets. A review copy of the game was provided by 360 Public Relations.