Things are getting darker out there in the Marvel world with the release of Marvel’s Midnight Suns out there. A new tactical RPG out there from Firaxis Games that have a solid history in giving us all the best of the best with those. This time in the Marvel setting and digging into the dark side of it all in general. In addition to all of that, there is some extra card game and friendship simulation mixed in too. All poised to make sure our Midnight Suns team is ready to head out there and save the world once again. Here we go with our full review of the game that is currently out there on the PS5, Xbox Series X|S, and PC.

Times are getting dark out there and Lilith, the mother of demons, is out there to grab for power and rule everything out there. Thankfully, for the humans out there, the daughter of Lilith is out there and on the side of good. Even if it does take that Midnight Suns to bring the Hunter back into the fray and rid the darkness out there. That is what we have to contend with all while keeping the team together and focused on doing the right thing. Not to mention that we have to balance the conflicts between the Avengers trying to force their way in to save the day instead. That is why we are put to the task, I guess. 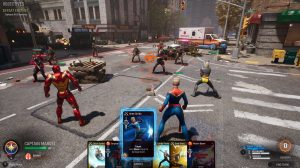 So, there was no shying away from the fact that Marvel’s Midnight Suns was going to have some bits of a friendship simulation in the mix of the game. Things that we will have to do to build relationships with each of the other characters and play into the team dynamic a bit more. Some of which are reflected in some of the skills and abilities. Sadly, there is a lot more of this going on in the game than we have been sold on. We have to micromanage all of the various aspects here for the relationships in Marvel’s Midnight Suns and it can get overly tedious along the way. All to the point where I wished I could have started to ignore it all. Especially when it started to lean in on the various gifts and use of other resources in the game to just make someone happy in the game. It is just something that cannot be ignored unless you want to play everything on the most insane mode, it would seem.

Speaking of resources in Marvel’s Midnight Suns, there feels like there are so many out there that it gets dangerously close to feeling like a freemium game. Thankfully, there is only one currency in the game that is used to give us cosmetic bonuses, but when you have to try to manage seven different resources to upgrade cards, all manner of reagents to craft with, and then all of the actual cards we have to use. It feels like it was something in the game to keep progression to a steady state but it is extremely annoying in the mix of the game more than anything. It slows down the progress of Marvel’s Midnight Suns when you have to go out and search the world for the various elements and then take on extra missions just to make sure we have everything we need. Yeah, that sounds like we have to play more of the game but when you have to grind through some missions you do not want to just to level up a card along the way, it can make you want to put it right back down.

This all leads me back to my last bit of Marvel’s Midnight Suns that I found issue with. That has to be some of the missions and how some of the difficulty never seemed to be true to it all. That has to come down to much of the randomness we have to play with when it comes to the cards we are given. I have had massive issues with Easy missions and walked right through Hard missions all due to how the game doled out the cards randomly. Sure, that can be seen as a feature in Marvel’s Midnight Suns, but it truly feels like a bug when you are judged at the end of each and shown why you failed. It always felt off to me and never seemed to keep any kind of consistency. Sure, you can just ignore some of that but it can feel like a crap shoot when trying to plan ahead and enjoy the full game. Not that you cannot, but it deviates from what you are told from the starting tutorials. 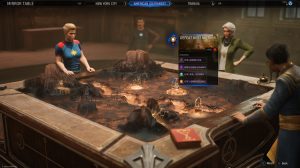 If there is one thing that Firaxis Games needs to pride themselves on, it comes down to the way they do the tactical aspects of their games. It is done insanely well in Marvel’s Midnight Suns and was what kept me coming back day after day to keep the fun going. It is all based on the cards, character position, and a heroism rating that has been built up during the mission. It will have you slowing down, taking a moment to plan, and then going through the fun paces of putting the plan fully into action. Just as we have been expecting and then get to see how the Midnight Suns are able to kick ass and take names. More so when you get to mix in the fact that we can also use the environment to our advantage in the fight too. Thus a further focus on the battle tactics of the game and how even the slightest mess up or perfect plan can reap the worst or best rewards. The team has truly knocked it out of the park once again in this aspect.

While I did gripe on it a bit above, the world exploration outside of the tactical aspect of Marvel’s Midnight Suns was also a whole lot of fun. Even if it is just around the Abbey and some of the basic outlying areas. Not just to collect all of the various things mentioned above, but also to expand out on the story for the characters in the world. This also includes for the villains too. Not just in roaming and looking, but also in solving a few extra puzzles. Sure they give us some other bonuses but it is all a great break from the repetition of things mentioned above. It even has its own little story mixed in as we collect extra Words of Power to unlock more of the area and other exploration aspects out there. I know I dove right into all of that right out of the gate and unlocked way too much from the start of it all. Even when there was one of the level barriers placed out there, I still found ways around to keep that fun going.

Lastly, and if you have been paying attention to our coverage of Marvel’s Midnight Suns up to now, you might know we were iffy on the various characters we were going to have out the gate. Half felt like they were perfect for the team and the other half felt like they were tossed in because they happened to be popular in the comics. I am sure that was part of the reason, but when it comes to the story and conflict, it works out well. It adds a bit more of that Marvel humanity to the characters that have drawn so many into the games, films, and TV shows after all of the comics. Sure, things can get a little grating when it comes up but it tells a great story that goes further beyond the fact the Midnight Suns are just here to end all of the evil in the world. This is where the best part of the stories and conflicts come into it all and give us something extra to love about the game. It was not something I was expecting to be okay with, but here we are… 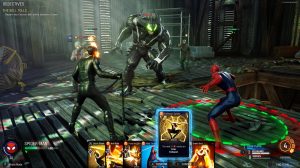 If you want to have a solid tactical RPG title, Marvel’s Midnight Suns is definitely that. At least when you are able to dive into that aspect of the game. It feels like it is only a third of the game, though, as there is much more focus on the relationships of the game and then grinding up the different resources needed to progress. If we could skip those parts and not feel like we are held back, Marvel’s Midnight Suns would be next to a perfect title out there. None of that is so overwhelming that it should not be experienced but it needs to be known or you might get upset and just drop it all right away. I had a great time with the game and fully recommend it all but none of those issues were ever highlighted in any of the promotional stuff leading up to the launch of the game. Just know it and you will be able to have an amazing time with it all.

I give Marvel’s Midnight Suns 5 Witch Skulls on the Witch Skull scale.

Marvel’s Midnight Suns was developed by Firaxis Games and published by 2K Games for the PS5, Xbox Series X|S, and PC on December 2nd, 2022. A PlayStation copy of the game was provided by the publisher for reviewing purposes.