It has been way too long since the last time I played a classic side scrolling bullet-hell. I’ve longed for something to remind me of my days of playing Super R-type on my SNES or shelling out quarters at an arcade. Thankfully, Psychotic Psoftware has broken out into the indie game business with Power-Up and has given me that nostalgia, as well as something new to savor.

Power-Up is a brand new Xbox Live Indie Game from brand new one man developing studio, Psychotic Psoftware. It is a horizontal side-scrolling shoot-em up with beautiful scenery and frame rate. The game takes place in the year 2112. Earth has been overrun by a Lizard-like alien race that arrived under the premise of peace to scout the planet. When the alien race attacked, the Earth defenses were no match for the numbers of alien ships. The only hope the human race had for survival was to escape on several large shuttle crafts. All shuttles split off and escaped in different directions, and were hunted down one by one. The last shuttle craft remaining, The Nimrod-7 is under attack and their only option is to activate their new prototype warship, Weapon-F. As Weapon-F launches, the Nimrod-7 is destroyed leaving the pilot as the only remaining human in the Universe. The mission you’ve made for yourself is to exact revenge on the Lizard race. 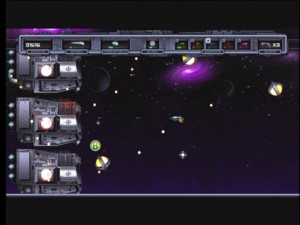 Power-Up stays true to the classic side-scrolling shoot-em up game type, while adding a strategy and leveling system. The warship Weapon-F has 5 weapons: a normal shot, a spread shot, a rear shot, and side shot, and a short-ranged rapid fire. Each weapon can be leveled up by picking up special globes with the letter P on them. Whichever weapon is equipped when you pick up the power-up orb will gain a level. With each level shots will be larger, do more damage, and travel/fire faster. Weapon-F also has a force field that can be manually deployed. The shield can only be used a limited amount of times, but only gets depleted if something hits you while you have your shield deployed. The shield only stays deployed as long as you hold down the B button on your controller. You also have a power bomb function that clears the screen of all enemies. There are 5 orbs that you can collect during game play. The most common orbs have a B on them and give you Bonus points when picked up. P orbs add a level to your currently equipped weapon, F orbs add a force field to your reserves, and X orbs add a power bomb, or “Blast”, to your reserves, and S orbs increase your movement speed, making it easier for you to move and avoid taking damage. 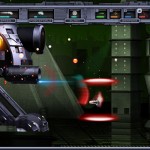 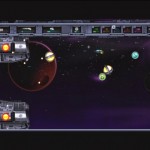 Your travels will take you through space and to the Alien home world where you will destroy their super cities in an attempt to eradicate the Lizard race. The enemies you encounter will start out simple, weak and stupid, but will become increasingly smarter, stronger, and more numerous as you progress through the levels. You will meet enemies that have no purpose other than to restrict movement, some that try to flank you, and even some that follow you in an attempt to destroy you. Certain enemies will reappear in later levels, but will be larger and much more powerful. With enemies entering the playing area from behind, above, underneath, and in front of you, you will rapidly be switching between your weapons in order to create safe passage for your ship. Each stage also has an end boss for you to defeat in order to pass to the next level. 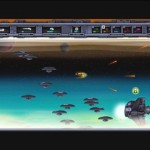 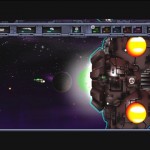 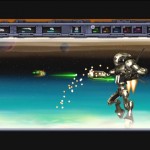 Power-Up features multiple difficulty levels, which change how many lives you are given. I have not found a score amount that awards an extra live, so I am under the impression that there is none and you must complete the game with the amount of lives that you start out with. You can unlock extra paint jobs for Weapon-F by completing the game on different difficulties or playing the game for a certain amount of time. The time required to unlock each paint job is quite long, so it would be better to just practice perfecting force field deployment and playing it on the hardest difficulty in order to completely unlock all skins. Or, you can just play through the game repeatedly for hours on end, in an attempt to better your high scores.

Power-Up was developed and published by Psychotic Psoftware Studios. The game is available for Xbox 360 from the Xbox Live Indie Game marketplace. Power-Up retails from the marketplace for $1 USD. A copy of the game was purchased by myself for review purposes.