When you hear a title like The Entropy Centre, most of us will go to something vastly different in our heads. In the case of this new title out there, we are going to be seeing a puzzle adventure game from Stubby Games that has a fun bit of heart behind it. Also, some very dark humor in the mix as we run around with our special gun to solve various physics puzzles. Not only in the mechanics of the game but also in the main story of it all. This might make you question if The Entropy Centre is going to hold up as others like it have. Well, for those questioning that, here we go with our official review for the game that you can get your hands on right now if you so wish to.

The future just never seems great for the Earth and it is about the same in The Entropy Centre. Something has happened but we have a chance to fix it all. As long as we can get enough of that sweet, sweet entropy fuel out there. To do that, though, we are going to have to go through all manner of puzzles and hardships to fill up the reserves to send Earth back to a point where it is not too late to save everyone on it. That is the goal of The Entropy Centre and, thus, the goal of us and the protagonist in the mix. Get your gun ready and your brain sharpened up for all of it once more. 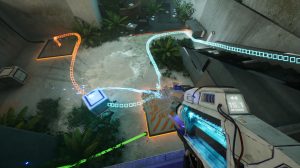 While most of The Entropy Centre focuses on puzzle solving and figuring out how to progress through the game and story, there are a few sections that come up that turn the game more into an action title. A hard shift from what the game normally sets up and they seem to happen at random times in the game. For the story, it makes sense as the building goes into a lockdown and we need to face off an endless wave of bots trying to kill us. For me, though, these sections always felt like the team thought they needed to have more action in The Entropy Centre instead of relying on what makes the game so good. Even when the robots are in the world and part of the area to overcome, they feel needed. In these few sections where we need to rapidly solve multiple puzzles to end the lockdown, they just add a lot of extra stress that does not feel needed in a game like this. Thankfully, they are few but they always broke the flow of the game for me and led to a little bit of hate.

My only other major gripe I have with my time in The Entropy Centre has to boil down to the UI features we are given in the game. Specifically, when it comes to trying to track the paths of the objects we are moving in the game. Part of the problem-solving in the world is that we can move things backward in time with our gun, so we always have to be planning in that way. To try to help, we can sometimes see the highlighted paths we took with the objects. If we were always moving perfectly in the game world, this would be a helpful feature. For someone like me, and most likely many others, they will be a little more erratic in the movements and quickly see a line of blue arrows that is hard to follow. Most of the time requiring a whole new start to the puzzle to make sense of it all. This gets worse when there are multiple objects we need to move around too. It is nothing horribly game-breaking, sure, but something that detracted me more than aided it all.

Lastly, and this is a true nitpick, The Entropy Centre does use a lot of the same forms of humor and puzzle styles as other games out there. Portal and Q.U.B.E. being some of the bigger ones. While I am sure that these are more of a nod and inspiration for the core of the game, they stick in almost like they are ripping off. It could also just be me, but when I hear a joke that I could wear Glados has made, that is all I can think of instead of focusing on what The Entropy Centre is trying to pull off. Just be ready to make those comparisons and then ignore them and you should be fine, though. 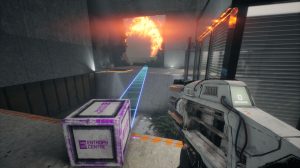 In games like The Entropy Centre, getting the controls and physics to work perfectly are the top-level thing that is always needed. Some do it well, while others not so much. This one is a shining example of how to get things to work out well and add some new ways to go about it all. It does not have the same kind of momentum physics and elements as the others mentioned here, as The Entropy Centre does rely more on the time reversal aspect more, but it all blends and flows well. All while being challenging but functional along the way. Not once did I feel like I had to blame the game for failing but only myself for not using the tools and physics the way they should have. That or missing out on clues and other helpful things to help guide me through the game. A perfect balance that made the whole thing fun at the end of it all. A massive task to accomplish indeed.

Even though I did list some of them in the gripes above, the next part that seemed to flow extremely well in The Entropy Centre were the various puzzles and types we encountered along the way. I mentioned some felt like they came from other games, but all of them felt like they not only fit this game’s world but also used the different mechanics to offer a different challenge out there. There are only so many ways one can make a puzzle that requires us to fling a cube across a whole level out there to hit a switch. Those puzzles ignored, though, The Entropy Centre leans more into its own mechanics out there and builds up many new and unique puzzles that only working backward feels like it would work for. An odd thing to say, but once you are in the mix of it all, it makes perfect sense. Even if sometimes the hardest path was the only one that seemed to be the correct option out there.

Now, I griped on it before, but the story in The Entropy Centre needs to also fall into the Loved category for this review too. It is so hard to break apart from so many preconceived notions and thoughts when it comes to games like this, especially with similar jokes being played, but if this is your first step into these kinds of games it will hit just as hard as those other ones once did. It is a fun and silly story about saving the world, but also peppered in with a lot of humor and heart along the way. Even if the puzzles can get frustrating at times, you will want to see how The Entropy Centre continues on with the story beyond just a test subject going through some paces to collect a made-up fluid. Just as we had in those other games. We just have to relearn how to forget all of that and just enjoy this one for what it is. I only wish I could have done that from the start to fully be able to enjoy it all.

If you could not tell by now, I fully recommend picking up and playing The Entropy Centre for yourself. Most of the issues I ran into were completely on my side of things and not on how the game was written, designed, and packaged. I do wish that there were not those tonal shifts in the game at weird points, but I have a feeling that was Stubby Games trying to break things up just a bit instead of having the game feel monotonous. Not that it ever did for me, but I can see where some of the newer gamers out there could see that. Nonetheless, give The Entropy Centre a try and see it all for yourself. That or have a look at the opening eighteen minutes of the game to get a fuller understanding as to what is going on out there.

The Entropy Centre was developed by Stubby Games and published by Playstack for the PS4, PS5, Xbox One, Xbox Series X|S, and PC on November 3rd, 2022. A PlayStation copy of the game was provided by the publisher for reviewing purposes.