Developed and Published by Telltale Games this episodic game takes place within The Walking Dead universe. While some characters share the names of those in the comic and TV show, it is a whole new story. The Walking Dead is a point and click game with “precision” quick-time events. Instead of simply hitting a button you have to aim in a specific spot and then hit a button. I sat down to play The Walking Dead expecting a quick little hour or so session but I soon found myself sucked in to the characters and their story. I actually finished the game in one session.

You play as Lee Everrett who starts his story in the back of a police car talking with an officer, or not as is a choice, about anecdotes and whatnot when shit hits the fan and they get into a car accident. Lee is knocked unconscious spends a few days in the back of the police car. When he awakes he finds that that world has gone to hell. He quickly learns of the walkers and does what any smart person does in the event of being unarmed and swarmed by walkers: RUN. After hopping a fence he finds himself in a backyard. There he finds a little girl named Clementine who has been surviving on her own in her tree house. Lee and Clementine team up and they begin their journey of survival. 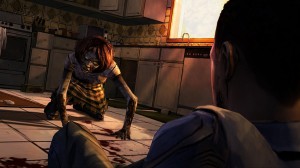 Game play wise I was expecting a very boring point and click experience like Myst (haters gonna hate) but what I got was an exhilarating thrill ride, chalk full of very tough decisions, a couple of them I truly felt regret for making, and intense close quarters combat that got my heart pumping and my adrenaline flowing. Not to mention the story is non-linear. They flat out tell you: “The decisions you make in this game will impact the story.”

The story in the game is only just starting but I have to honestly say it’s very emotional and powerful. Just like the comics and TV show. Fans of The Walking Dead will feel right at home with this story and it’s loveably and “love to hate” characters. I seriously cannot wait for episode two.

Graphics, what’s not to love about these graphics? They remind me a lot of Borderlands, which is a good thing. It’s just the right mix between cartoony and realistic to give the characters real emotion and also let them be unique in their own way.

I highly recommend everyone go pick this up. Even if you’re not a fan of The Walking Dead you will definitely appreciate the story and the characters within it. As I said, I eagerly await episode two.

You can pick up The Walking Dead: Episode 1 on PC, PSN and XBLA for about $5. Future episodes will be available at later dates and there are a total of five episodes in all.