We sit down and review Vampire: The Masquerade — Swansong. A new investigation title in the World of Darkness. Here is our review of this Vampire game

The world of Vampire is ready to suck us all back in and try to give us all a new experience we have not had recently. There has been some action. There have been some visual novels. There have even been a few Battle Royale style games. This one is Big Bad Wolf aiming to give us all a more political and investigation heavy title to show us the not-so-common aspect tabletop gamers are generally used to. Here is our review for Vampire: The Masquerade — Swansong to see if it will be a potent new addition or should be put to final death before any harm is done.

Welcome to Boston and the world that exists behind the cover of night. The vampires of the area normally have things on such a tight lockdown that the mortals would never be able to see through the Masquerade they are upholding. Sadly, as it always seems to do, that facade is broken and things are going sideways for the Prince of the city and thus the rest of the denizens. Now a trio of kindred have been tasted to find out what has gone wrong and how it can be fixed so their unlives can go back to normal again.

Right out of the gate, Vampire: The Masquerade — Swansong mimics some of the playstyle and control schemes we have seen in other titles like it. The Council comes to mind first and specifically with the need to have certain skills and/or disciplines (vampire powers) to progress part of the story or solve portions of it. All of which are driven through various resource pools. That is fine and well, and normally would fit, except for the fact that it is never really well-laid-out what we are going to need from chapter to chapter. Will you need the Education skill or the Intimidation skill for this chapter? Who knows until it comes up and you do. Sure, this could lead to some replay value for the game, but when things are gated behind it, it would be nice to know we are making the choice to not take that skill and will pay for it later instead of not knowing and then being penalized for not knowing.

In addition to that, even if our vampire at the time has the correct skill, it is never a guarantee that you will be able to succeed at the task you are setting forth to do. Obviously, this is just as it is in the tabletop version of the game with some random dice thrown in, but in Vampire: The Masquerade — Swansong it does not feel like it hits the same way. After decades of being told that a 100% success rate is an auto-win because you stacked the deck to make it that way, this title will randomly make you fail with no explanation why. Even when you know you can “Focus” for a better chance and see the likelihood your opponent can do the same, the numbers never feel properly represented. I think I only had a handful of interactions during my play that went the way they should with many more giving a failure with no rhyme or reason. Sometimes feeling like the choices we were making were always wrong and that there was only one path we could ever go down.

Which brings me to my final glaring issue with Vampire: The Masquerade — Swansong. In these kinds of games, just as the one mentioned above, it always felt like our dialog choice and how we used all of our resources mattered in the game. Like there was a solid path we could find ourselves going down specifically because of how we played. I never felt like I had that in the game and was just completing a story with the illusion everything I did had some bearing on it. Many video games do that and there is nothing wrong with it, but when it is a selling point for the game, it would be nice to have a better understanding or showing of how it is all going down. That is if you want to ignore the chapter breakdown screen at the end where it does tell you the other choices and actions you could have taken along the way. 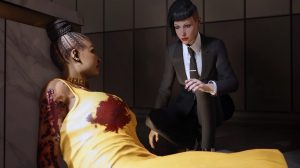 I know this one is going to be a sticking point for many out there, but for me, it made the game that much better. Having been a fan of Vampire: The Masquerade for decades now, it was a nice refresher to not have the basics spoon-fed to me once more. Big Bad Wolf makes the assumption that the core players out there for this game will have some experience with the IP and dives right into all of the jargon and lexicon without poor exposition to explain. There is the option to read it all in the game’s menus, but since we are taking on the roles of vampires that have been doing this for decades, there should be no need to have them explain what each word means. That is something that normally takes me out of the immersion of a game as it is hard to do well. This just made it feel more like Vampire: The Masquerade — Swansong was made by fans for fans of the IP. I fully understand that it does not make it easy for completely new gamers to jump in, but it was a nice and refreshing thing for me, and thus gets the love.

Building from that, it also feels like the team took some great strides to blend the tabletop rules and themes into the video game much closer than other games have done in the past. Mostly in terms of the disciplines, each vampire has to use and how they use them. Most of the time, it is something a little more generic and fitting for a game that typically has thirteen vastly different types of vampires (Clans). This one highlights the more social powers that allow for some domination or persuasion to go just as one should for these supernatural beings. Usually, this is left to some kind of stat or dialog option in other games. Vampire: The Masquerade — Swansong does that too, but it feels like you can use them is so many other ways too. It does not end there with this being an investigation game, the typical disciplines that would be used for this are also on high display and give players many different paths to solve the mystery at hand. Again, this could be the fan of the IP talking, but each of these powers lent itself well.

Lastly, and this is another one of the hot takes from this one, boils down to the puzzles and investigation options in Swansong. Some would say they feel a bit convoluted or unintuitive for the game, and while none are overly difficult they feel fitting not only for the challenge but the setting involved. They will force you to do the bane of being a vampire, paperwork, or actually wander the halls looking for any clue to solve the problem. Sure, there will be some in there where we will need to figure out a password or combination code in the usual sense, but it feels like Vampire: The Masquerade — Swansong is truly guiding us along with an investigation game and not one where we press a button and win. Not to mention, some of them also feel like the overly complicated things that a typical player would build in the universe and not something a normal developer would build for a game. This is not a slam on the developers but a bit of praise to use the source and make what some will seem like a bug be a true feature. 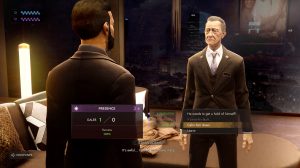 If you did not get it from the above so far, Vampire: The Masquerade — Swansong is not going to be a game for everyone out there. It was never designed that way from how I see it. It does stumble a bit when it comes to some of the implementation and use of the video game genre, but nothing that was every game-breaking. Those that enjoy a good investigation game can find fun in it. The bigger selling point will be for the fans of Vampire: The Masquerade in general. It is filled with so much of the world and lore that they have come to love over the decades that it feels more like a love letter to those fans more than anything. Not having your hand held for all of that will let you focus on the game more and let you feel like all of your past knowledge to good use. Those that do not have that experience are not fully left out but will have a bit of a curve to get over to get the same level of investment into the story and mystery to uncover along the way.

I give Vampire: The Masquerade — Swansong 3 Status on the Status scale.

Vampire: The Masquerade — Swansong was developed by Big Bad Wolf and published by NACON for the PS4, PS5, Xbox One, Xbox Series X|S, Switch, and PC on May 19th, 2022. A PlayStation copy of the game was provided by the publisher for reviewing purposes.