It would seem that there is a new document showcasing the schedules for the Xbox, PlayStation, and Nintendo conferences making the rounds online. The validity of this document is still to be determined but if it is true we could be seeing a new God Of War title as well as a demo for Halo 5. Of course at each respectful E3 press event and not in one big collaboration. Could you imagine that though? Sheer madness!

In any instance, this new rumored E3 document appears to be linked to “Judges Week” and all of the secrets that the larger paid and skewed media get to participate in pre-E3. If you look that up you can see what I am talking about but that is not what is at the core for this rumor. While I may be making a bigger deal about God Of War 4 on the list, it looks like there are many other unannounced games as well as listings for demos and trailers for titles that have only been announced and have no real meat to anything. 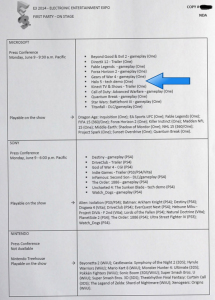 So a Halo 5 tech demo on the XB1 is another one that all the fan boys and girls will be wetting themselves over is listed too. So are Beyond Good & Evil 2, Gears Of War 4, Uncharted 4, and Quantum Break. Seems to me that there is a whole lot of “4’s” going on if the rumor ends up being true. Not to mention some great show floor time with Alien Isolation, Batman: Arkham Knight, and Sunset Overdrive. That looks like quite the showcasing for this year, unless you are Nintendo.

I guess we’ll have to wait and see if these are true. Some of them make great sense but others seem a bit off unless their development has been played that close to the chest that even patent listings have gone unseen for this long. We’ll be sure to update as this develops as well as cover everything that we can if this is a true list for this year’s E3.