Gamefly has listed a date for the release of The Last Of Us Remastered through their service. Could this be fact?

The Last Of Us Remastered just can’t stay out of the rumor mill can it? Even though it has been officially announced and had the official statement from Sony and Naughty Dog that they will not be holding back as they have news to give we still find more. This time around it is a suspected release date. A release date of June 20th 2014 if a pre-order page on Gamefly is to be believed as non-placeholder status.

Just in case it is pulled down, here is a screen shot of the listing on the site. 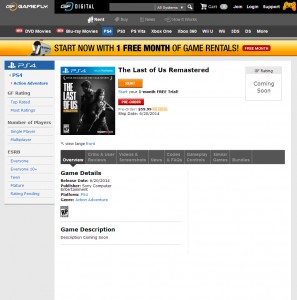 The Last Of Us Remastered – Release Date

Now to poke holes in the validity.

Yes this does show up on a legitimate site for starters but the date seems a bit off for my tastes. Usually PlayStation titles like The Last Of Us Remastered would be released on Tuesdays and the 20th is not a Tuesday this year. It is a Friday. Granted, Sony could be doing what they did with inFAMOUS Second Son and breaking the tradition again so this could be placing a bit more validity on the date. I am just not completely convinced this is not just a place holder and someone pulled the trigger too soon.

On top of that, this has made the rounds a bit over the course of the day so far and Sony has not put the kibosh on this “leak” yet. I doubt they haven’t caught wind of it yet and requested it to be pulled yet. They could be working on the announcement as we speak for all we know and this is all the truth. Until I hear from Sony or Naughty Dog directly I will keep this in the rumor mill. That most likely means that as I have just hit the publish button on this Sony and ND have just released a new teaser stating the date.

Until then The Last of Us Remastered will keep its summer 2014 window in my book. I don’t want to have to think about getting home from E3 and having to turn around and play this amazing game again…although I am sure I would enjoy every last minute as I did the first two times.